News for everyone, delivered to everyone
SUMMER IN THE CITY 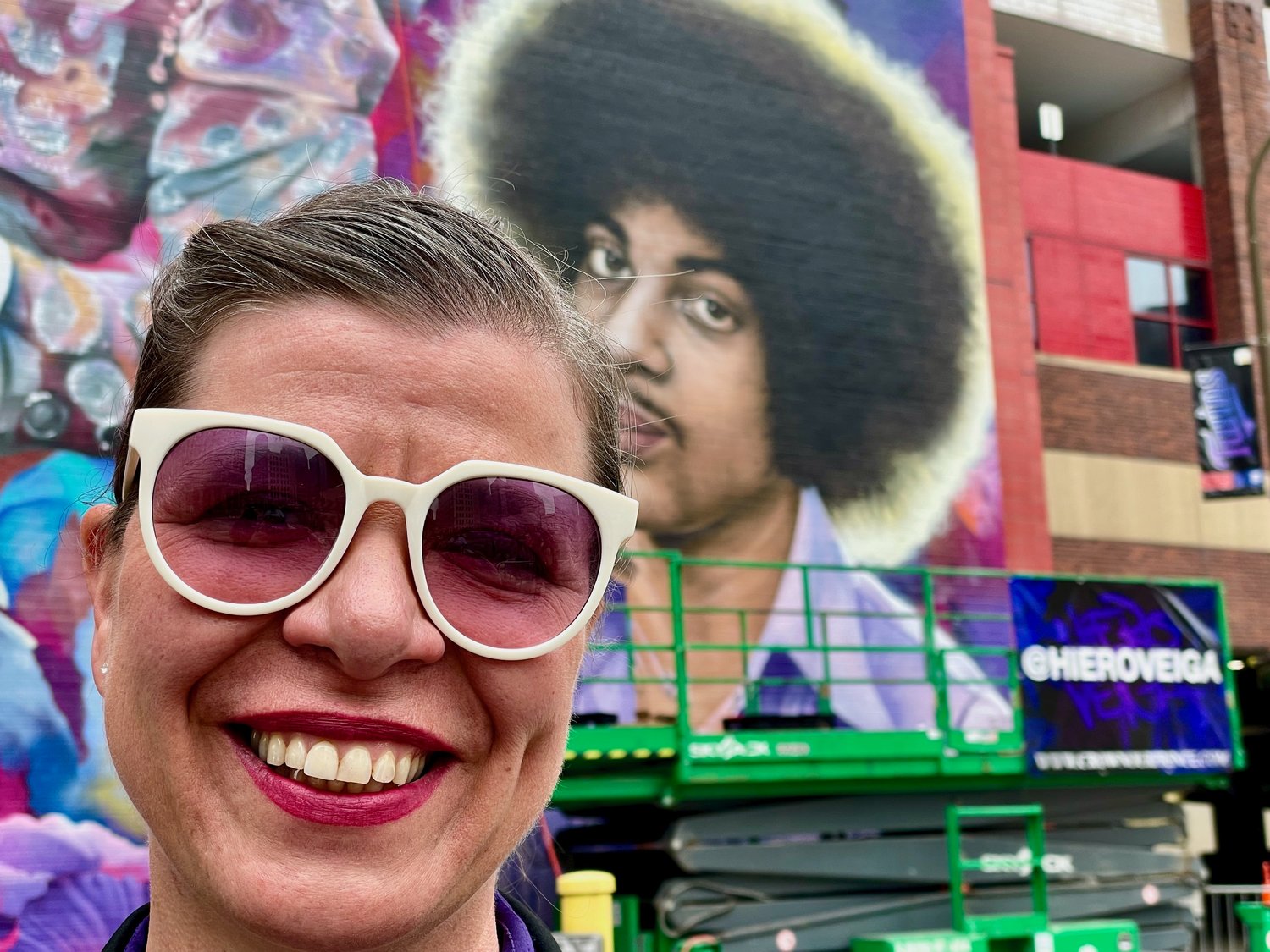 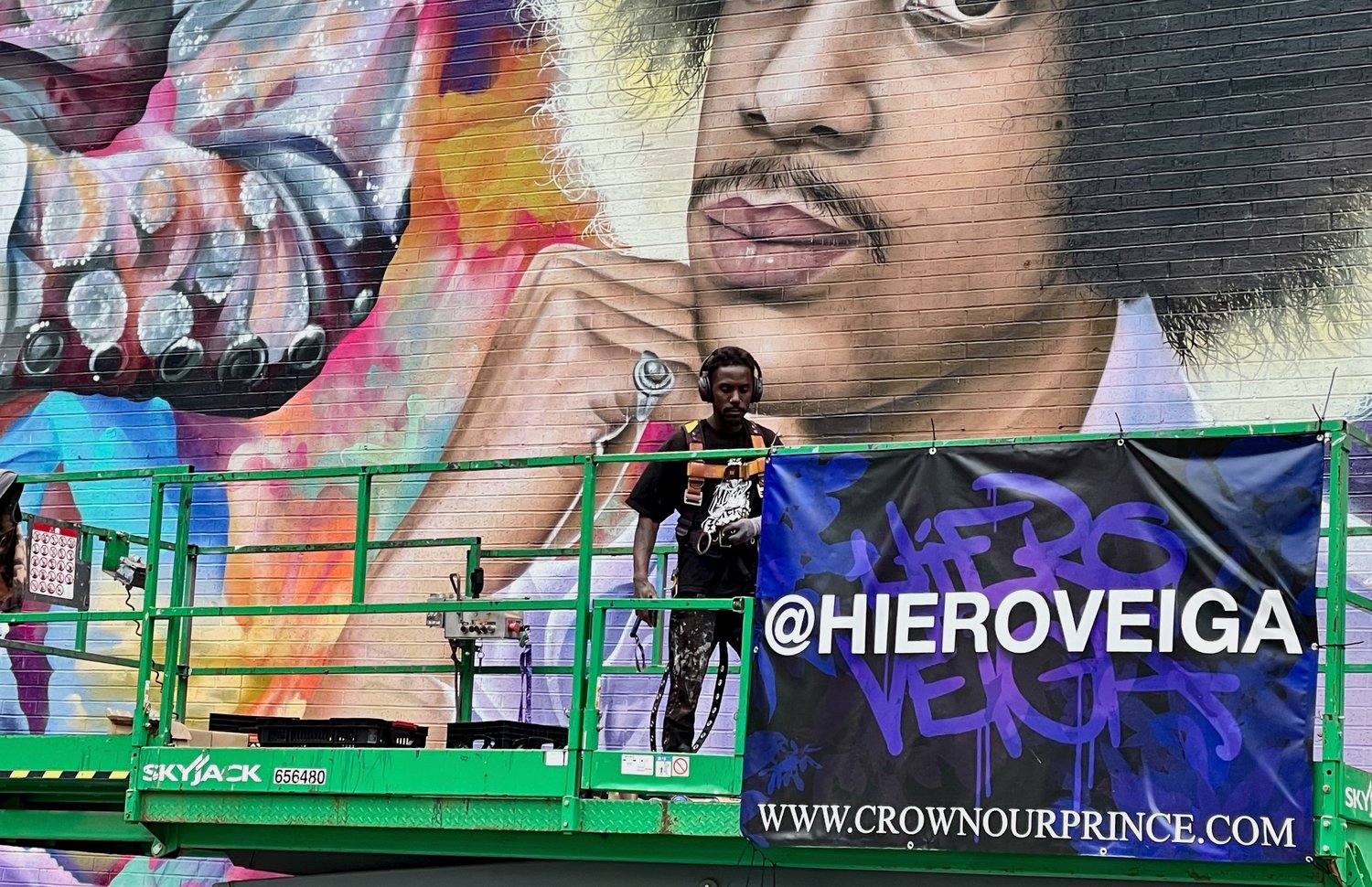 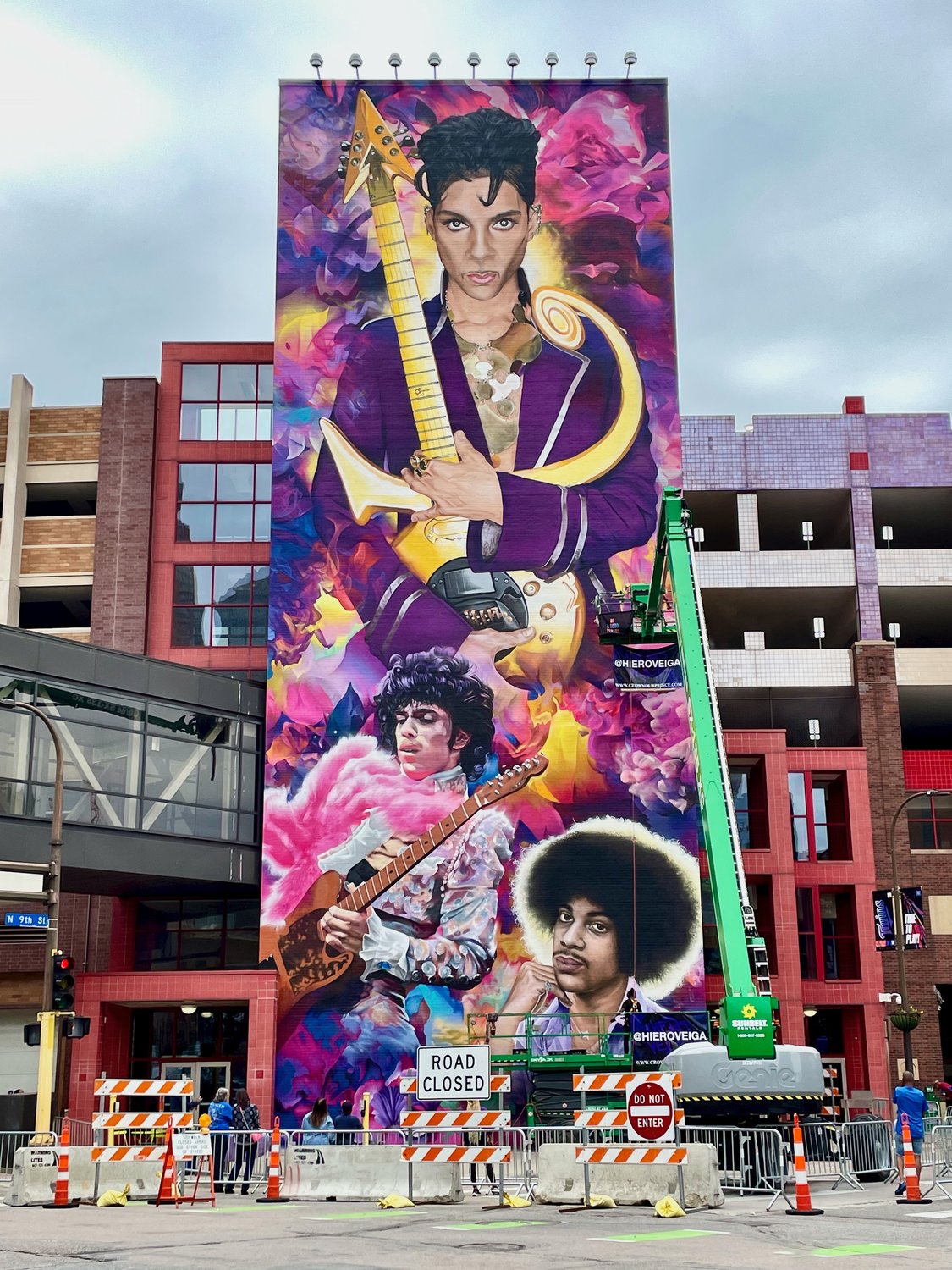 The newly unveiled Prince mural is at 8th Street and 1st Avenue on Parking Ramp A. (Photo by Susan Schaefer) 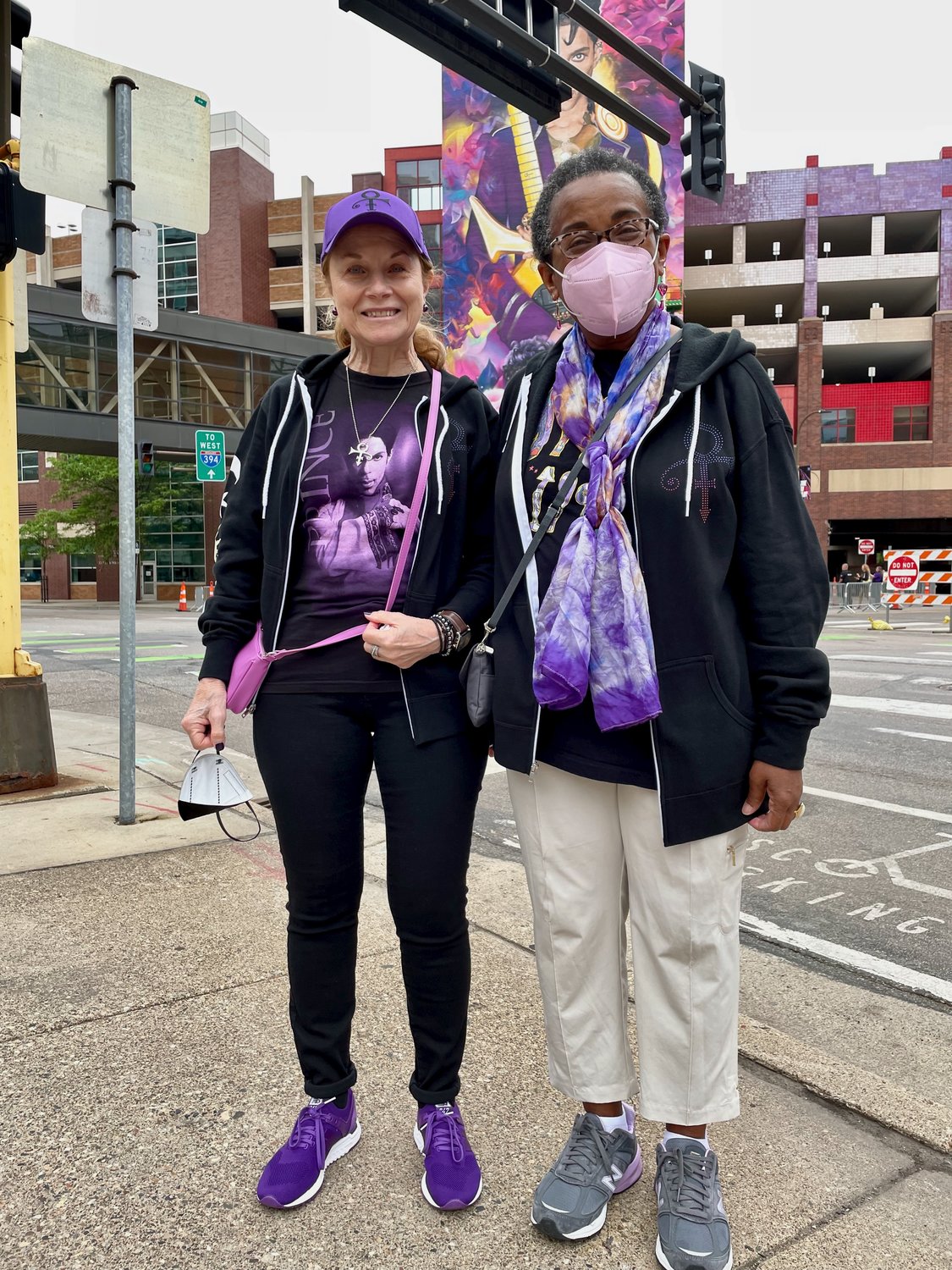 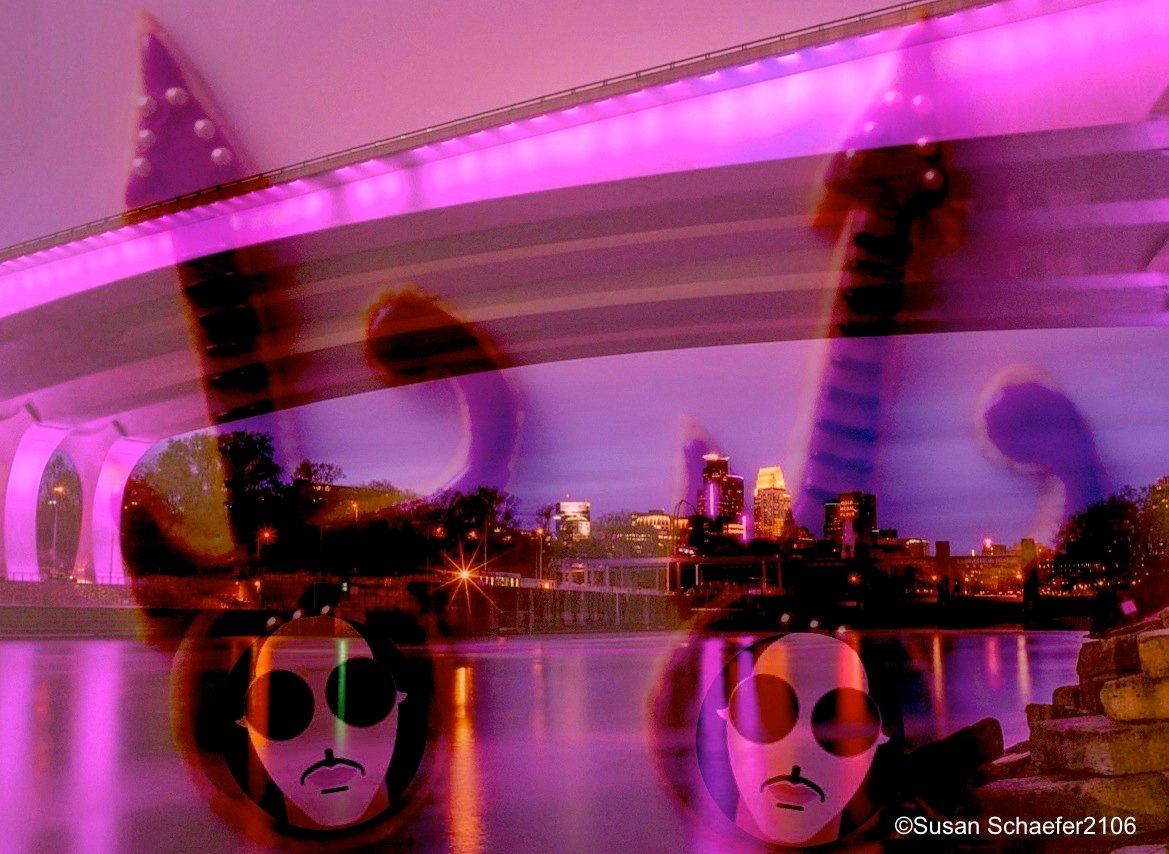 Something under the hood is not immediately apparent or obvious. This column will uncover stories that span the neighborhoods covered by TMC Publications. Susan Schaefer is a widely published independent journalist, creative writer, and poet. Her articles appear in the Minneapolis Star Tribune, PBS’ online magazine, Next Avenue, Next Tribe, and beyond. She was columnist and features writer for Minneapolis’ Southwest Journal and Minnesota Good Age magazine.

A bodacious birthday bash draws far-flung fans. What took so long?
To create something entirely new, never seen, touched or heard before – something that resonates deeply with the beholder – is a hallmark of genius. Many such virtuosos are often misunderstood or unrecognized in their own time or homeland. Yet, native Minnesotan, Prince Rogers Nelson, known as Prince, was wildly acknowledged and adored by ardent fans around the world.
Why then, did it take our community so long to recognize its own prodigy?

The Prince Mural Project
Back in 2015, well before his death on April 21, 2016, Prince’s former marketing manager, Sharon Smith-Akinsanya, was busy seeking a public tribute for Prince, even as the eye-popping, five-story Bob Dylan wall mural on the corner of 5th and Hennepin was getting finishing touches by world-renowned Brazilian artist Eduardo Kobra.
With Prince’s consent, Smith-Akinsanya had quietly approached Betsy Hodges, then-mayor of the Minneapolis, who enthusiastically supported the idea. However, critical additional official support was lacking.
Shockingly, even Prince’s untimely death did not generate the political will needed from the authorities to commit the necessary resources to honor him with a public art project. Determined, Smith-Akinsanya continued full steam to move the Prince Mural Project from planning to center stage, testifying before state legislators and arm-wrangling other civic and private sector leaders.

Add Joan Voderbruggen – the magic sauce
Eventually, Smith-Akinsanya met and landed the consummate ally, Joan Vorderbruggen, and new blood began to flow.
Possessing the will-power of an army of municipal leaders, Vorderbruggen, then-Director of the Hennepin Theater Trust, in fact, had purple running in her veins. Having spearheaded the Bob Dylan mural project, Voderbruggen has too many accolades to list, but she is credited for her seminal role in multiple creative projects that revitalized the beleaguered Hennepin Theatre District.
Voderbruggen is a founding member of the Placemaking Leadership Council and is nationally recognized as a placemaking and public art expert. Legendary for her “Made Here” twice-yearly window displays that transformed downtown storefronts into mini public art galleries, Vorderbruggen is affectionately considered an authentic civic booster and people-connector with a heart as large as the murals we’ve come to know her for.
Yet, even with her dogged involvement, it still took a confluence of events to move the Prince Mural forward. Happily, the Minnesota Department of Transportation and city of Minneapolis cooperated to offer Parking Ramp A’s towering façade, and tragically, the murder of George Floyd revealed the power of art as a form of community healing. Finally, the Prince Mural Project garnered the support it needed.

A Hiero for a Prince
Prince ranks among a short list of luminaries known by one name. So, it is entirely fitting that internationally known muralist, Hiero Veiga, who goes by the solo moniker Hiero, was selected from a field of 60 original artists to design and render the long-overdue tribute.
Evolving a hyperrealist style for the past 21 years, this self-taught artist’s work, which began with graffiti writing, has advanced to impressive worldwide commissions such as the exterior of Miami’s Museum of Graffiti.
In the months before his death, close confidants attested to Prince’s newly ignited spirit. At the time of his death, global luminaries sang his praises: Mick Jagger stated, “His talent was limitless.” Oprah Winfrey proclaimed, “The doves are really crying now.” And then President Barack Obama (uncharacteristically commenting on a celebrity) pronounced that Prince “was one of the most gifted and prolific musicians of our time, … a virtuoso instrumentalist, a brilliant bandleader, and an electrifying performer…Today the world lost a creative icon.”
The task set before the artist was monumental. Hiero’s bold 90-foot captures the colorful phases of Prince’s well-documented life.
And so it was that at the beginning of June 2022, several “Crown our Prince” celebrations marked an early 64th birthday bash to unveil this towering tribute.
I chose Prince’s actual birthday on June 7 to capture the images for this column and serendipitously got to meet both the cultural impresario, Vorderbruggen, and the muralist, Hiero, who was putting finishing touches on the masterpiece.
But it was two fans decked head-to-toe in Princely regalia who symbolized the impact of Prince’s life and death on a far-flung audience. New Yorkers, Dorothy Billis and Twila Perry, have been making a yearly pilgrimage to the Twin Cities since Prince’s death.
Endearingly, the two did not know each other in New York but met here the year following Prince’s death. Since then, they have become fast friends and are committed annual travel partners for the yearly festivities.
“We actually discovered Prince after his death,” confessed Billis. “We’re from a different generation and never knew his music.” “But once we heard his music, we were hooked,” added Perry. How did this year’s mural unveiling compare? Responding almost in unison, they declared that it was the best party yet.

Postscript
Prince rewrote life’s rules – he was never constrained by them. He broke free of the bonds of socioeconomics, race and gender, as well as those of the tightly controlled entertainment world. His lyrics, compositions, and instrumentality defied genre; his groundbreaking, risk-taking break with the recording industry’s star making prison unshackled him to not only explore new musical worlds but to plant his gender-blended glyph in the stratosphere. Now it literally soars on a wall across from his beloved First Avenue for all the world to see and pay homage.