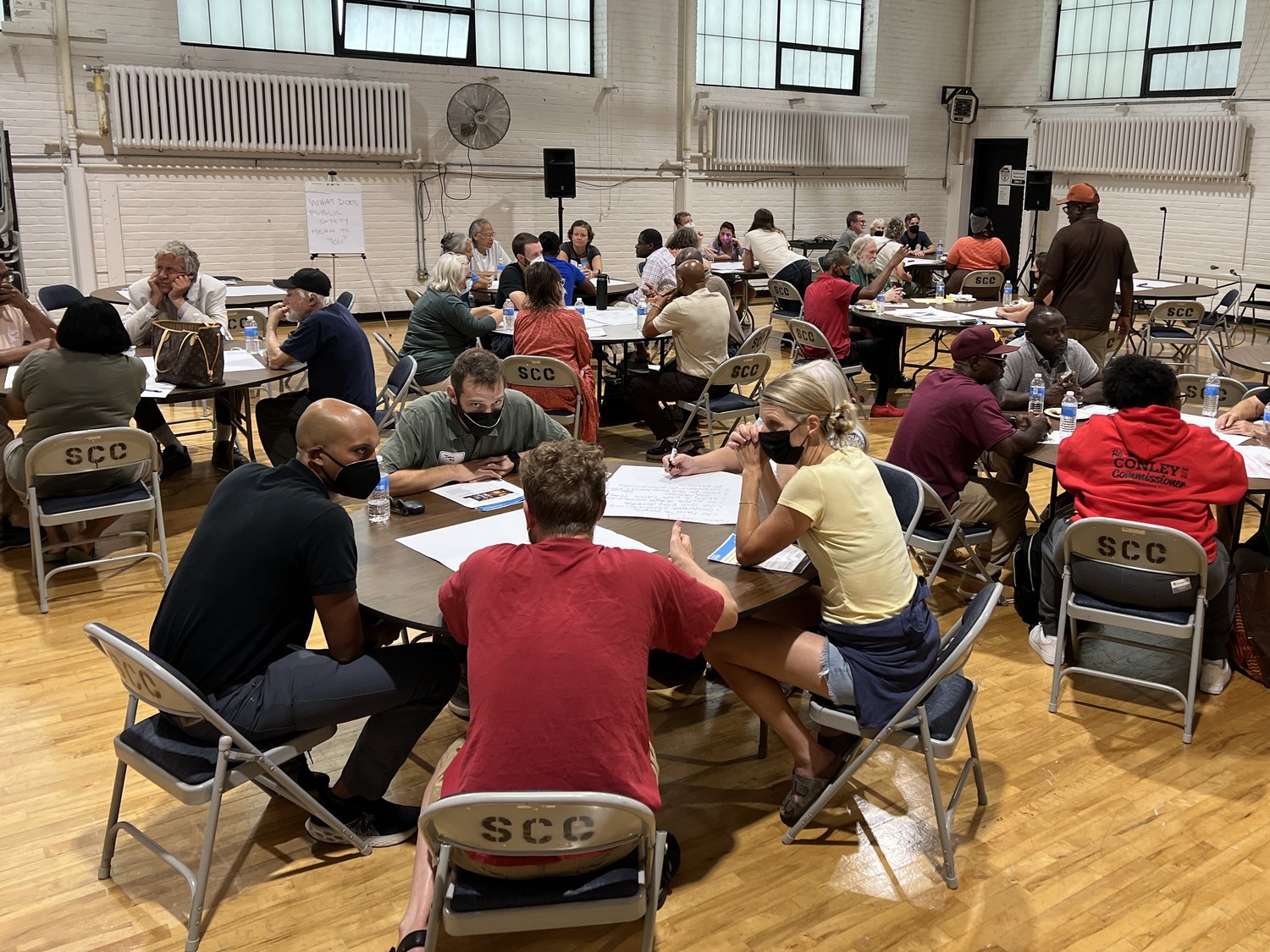 A few dozen residents filed into an upstairs gymnasium at Sabathani Community Center (310 E. 38th St.) on Aug. 29 to talk about public safety – specifically as it relates to planned road reconstruction at 38th and Chicago. Seated three-to-five people to a table with markers and white paper at the ready, neighbors shared their experiences and ideas with each other.

They were asked to respond to three questions: what public safety means, how to achieve it, and how the design of the intersection can facilitate it.

For one group, public safety meant feeling comfortable in the space, a feeling of belonging, with no gunplay or harm to people. For another, public safety meant having freedom of movement, including the right to protest for social justice. Another defined it as the ability to walk through the neighborhood without fear of violence or crime and called for “public safety officers we can trust.”

Accountability of police officers and city leaders was deemed necessary for safety; longtime resident Brett Davis (who incidentally challenged Prince to a game of basketball in the very same building back in the day) said he had been harassed three separate times by police. One resident reported that lack of service was “the flip side” to police brutality; police officers need to be doing what they’re supposed to be doing. Another expressed that “Neighborhood Watch is us looking out for each other.” And another said, “Justice brings safety.”

Resources need to be redeployed to level the playing field, said one group, and provided for people who need help with housing and addiction, said another There was a call for mental and physical health care and conflict resolution resources. Hennepin County Commissioner Angela Conley, speaking on behalf of her group, suggested investing in youth, ages 12-24, as a means to prevent future violence.

“If our babies are not okay, that means none of us in this room are gonna be okay,” she said.

One resident said they didn’t want traffic to slow to two miles per hour, while others called for little or no car traffic and a design like Milwaukee Ave. in the Seward neighborhood, which is open only to pedestrians and bicyclists, or Nicollet Mall, which is open to buses.

A number of residents spoke to the international significance of George Floyd Square, where many visitors make a stop during their stay in the Twin Cities. There was a desire for the preservation of sacred space and to respect the culture of what’s been created at the site. There were also calls to create a National Historic Landmark and a Black Wall Street.

Jay “The Gardener” Webb, a “builder and architect” of the roundabout surrounding the fist sculpture in the middle of the intersection, spoke to its significance: “No one can ever pass by it and be the same,” he said. “They come to mourn, and they take away the peace.”

There was a call to maintain services and provide public bathrooms, an assembly space, a garden, plaza and library, as well as deeply affordable housing. A couple of people suggested turning the former gas station, now known as The Peoples’ Way, into a more permanent gathering space.

Written on one piece of paper: “Designers should live in neighborhood.”

This was the first of 12 monthly “Learning Tables” to be held every fourth Monday at the same time and place, 6-8 p.m. at Sabathani, with dinner included (Afro Deli catered this evening’s conversation). The next session will be on Sept. 26. According to facilitator James Trice, of Public Policy Project, participants can expect a different topic each time.

“The world is watching what happens at 38th and Chicago,” said Trice, in closing out the meeting. “So, it’s up to you to create what you wanna see there.”

Have you been to Asa’s Bakery?