News for everyone, delivered to everyone
40 YEAR ANNIVERSARY 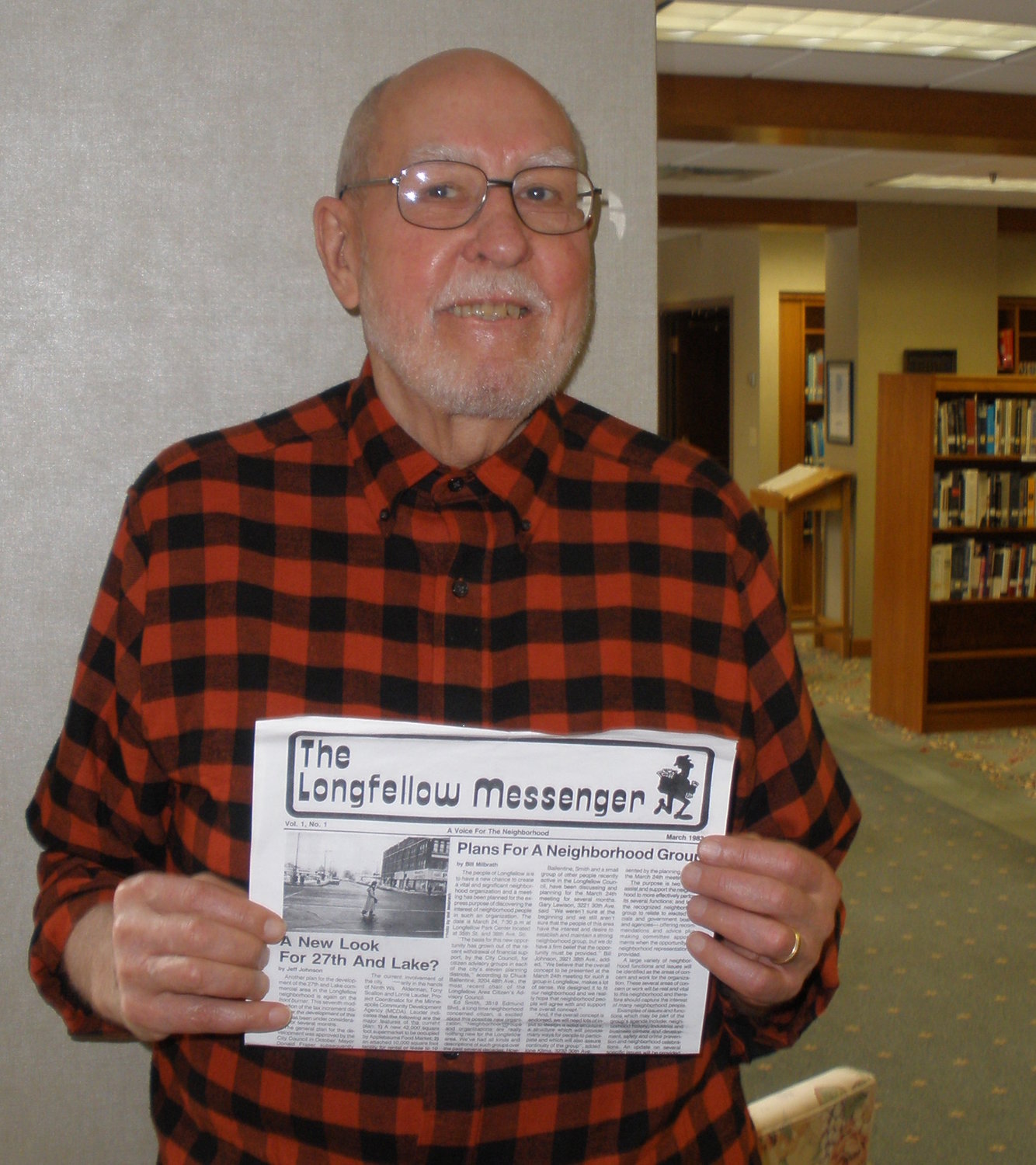 Bill Milbrath holds a copy of the first Longfellow Messenger in 1983. He and his wife, Maureen, started the neighborhood newspaper. It was sold to deRuyter Nelson Publications in 1986, and to TMC Publications CO in 2019. 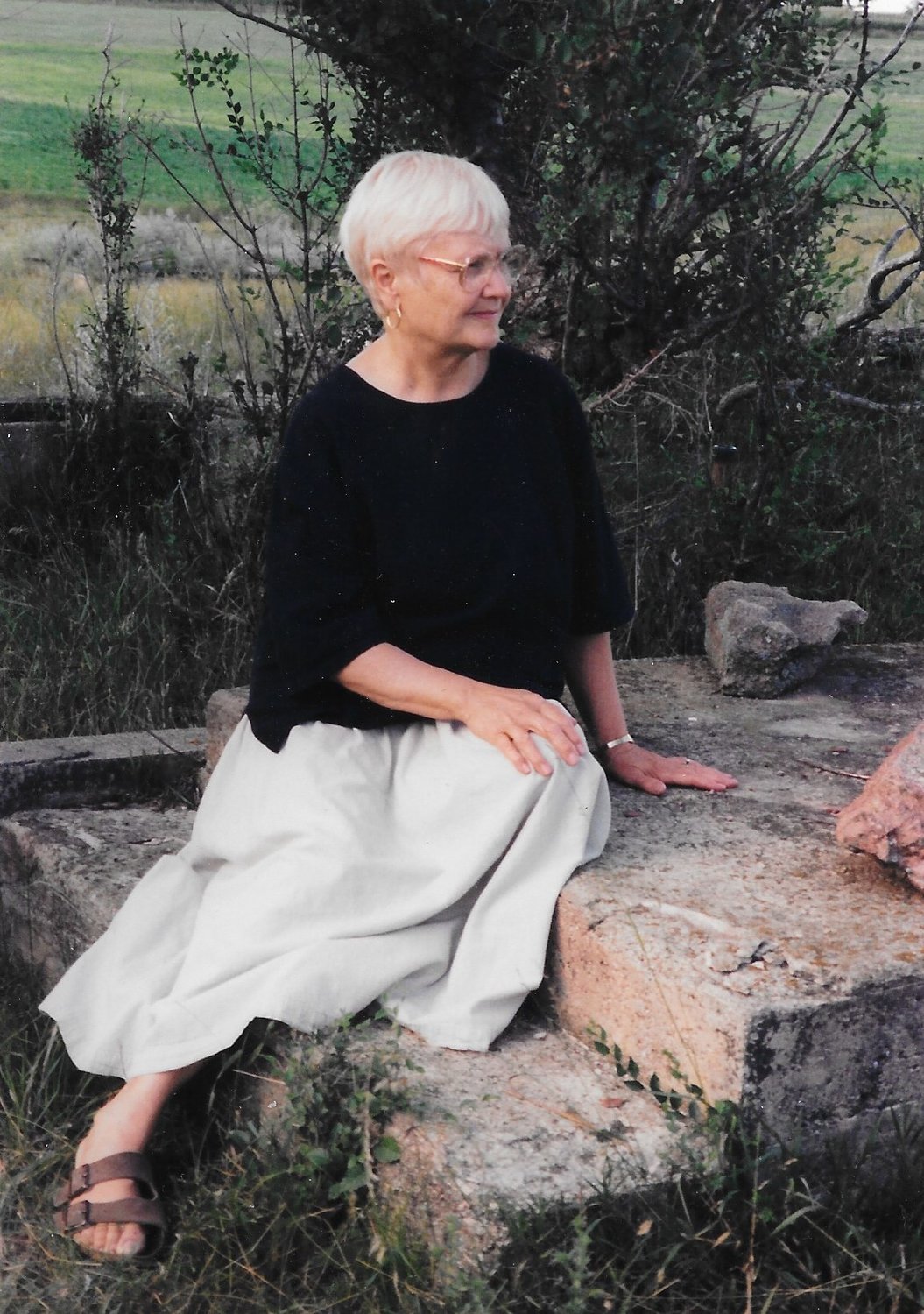 Carola Bratt wrote and edited for the Messenger in its early years. 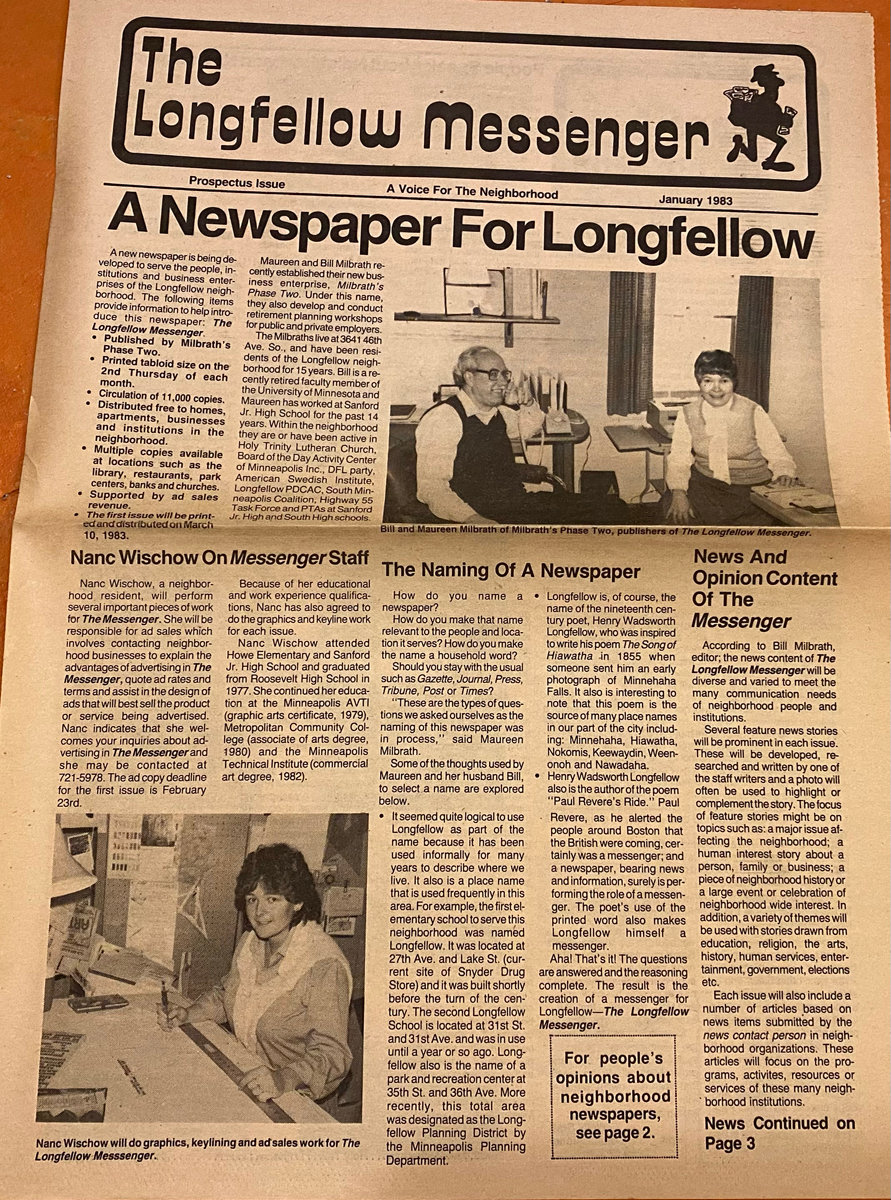 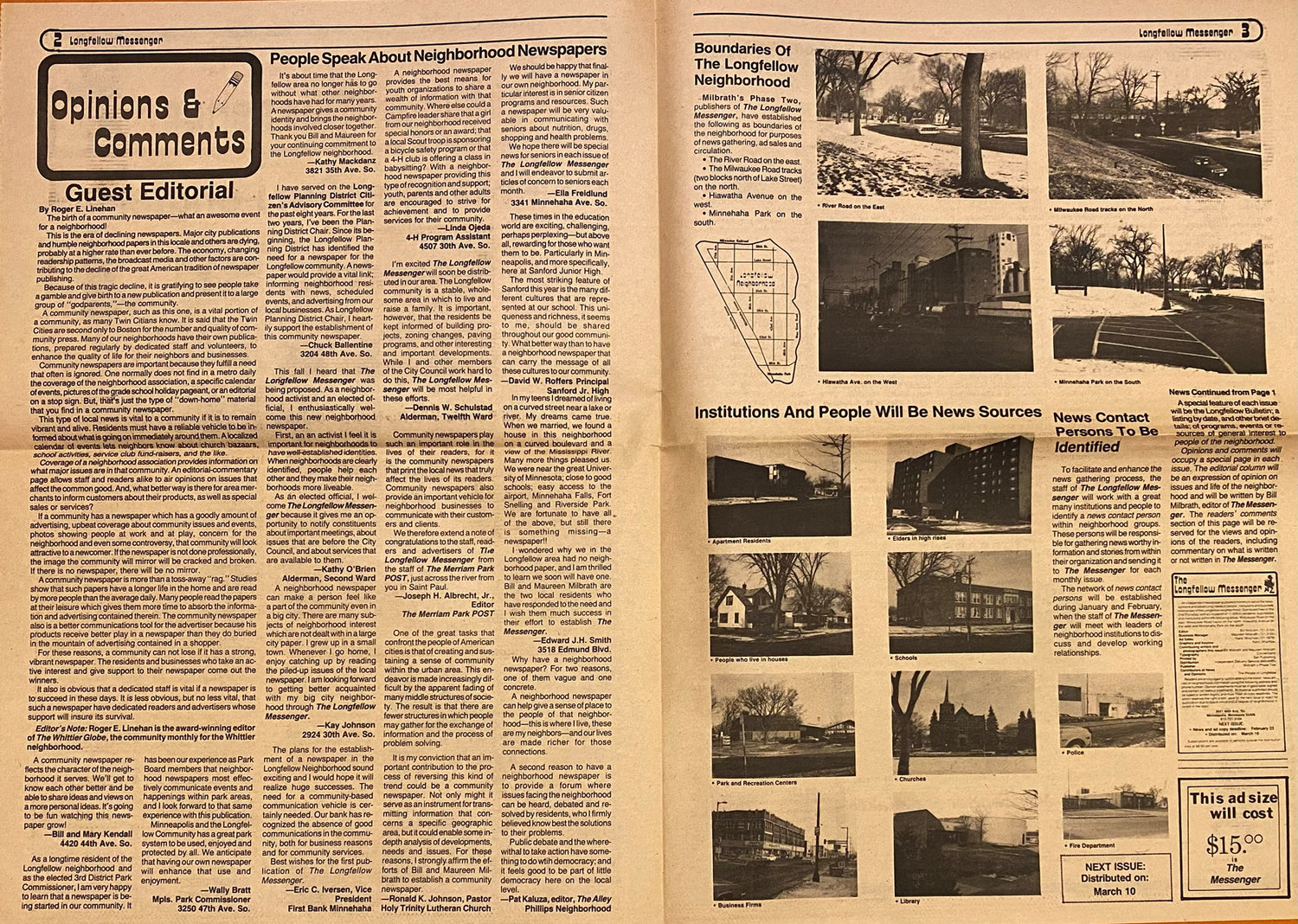 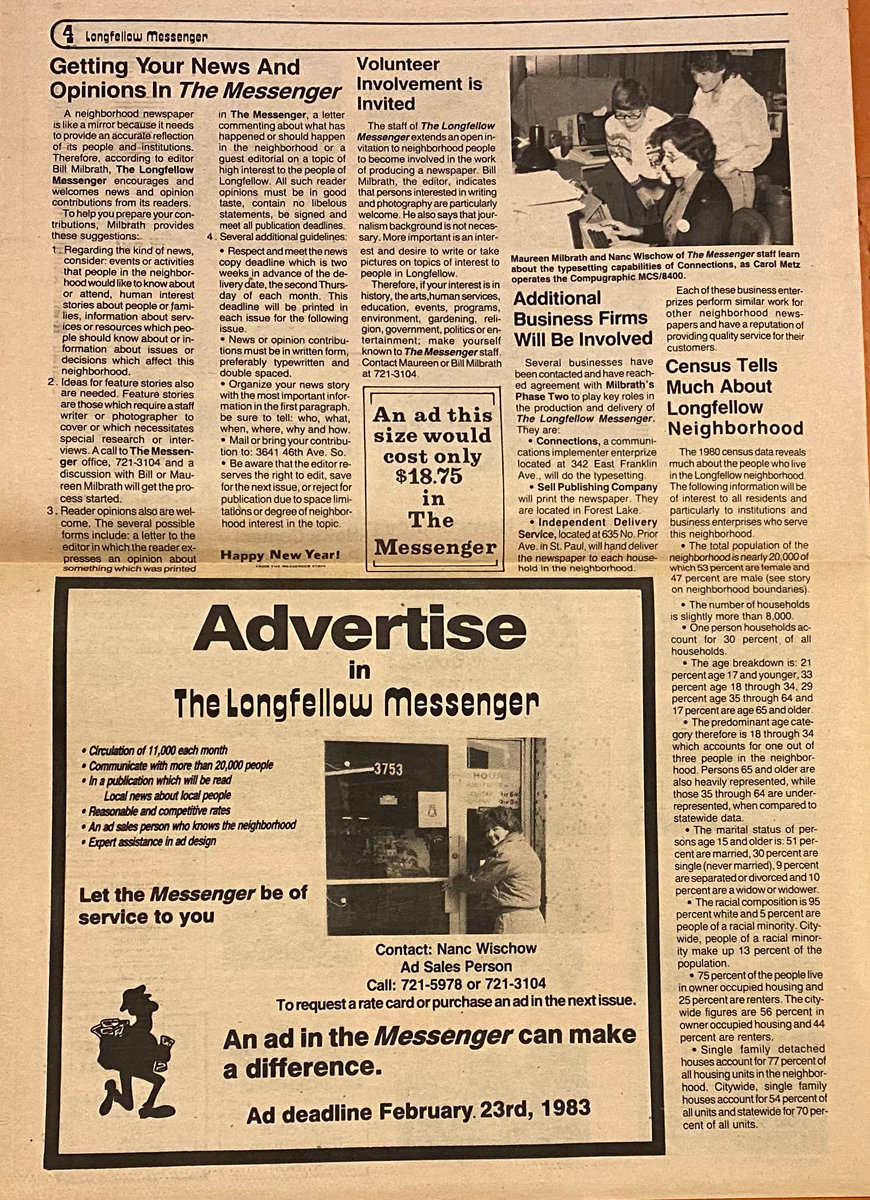 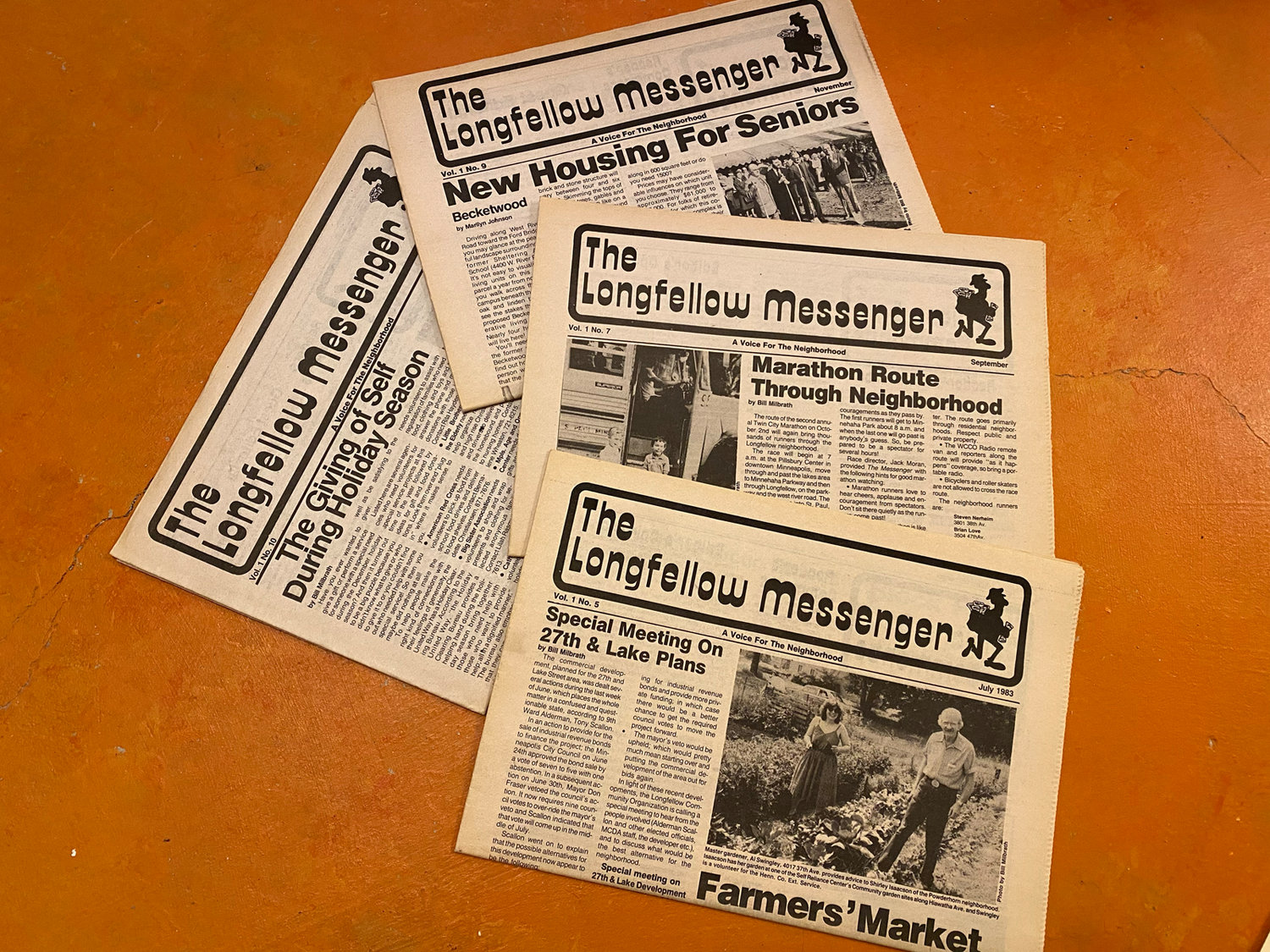 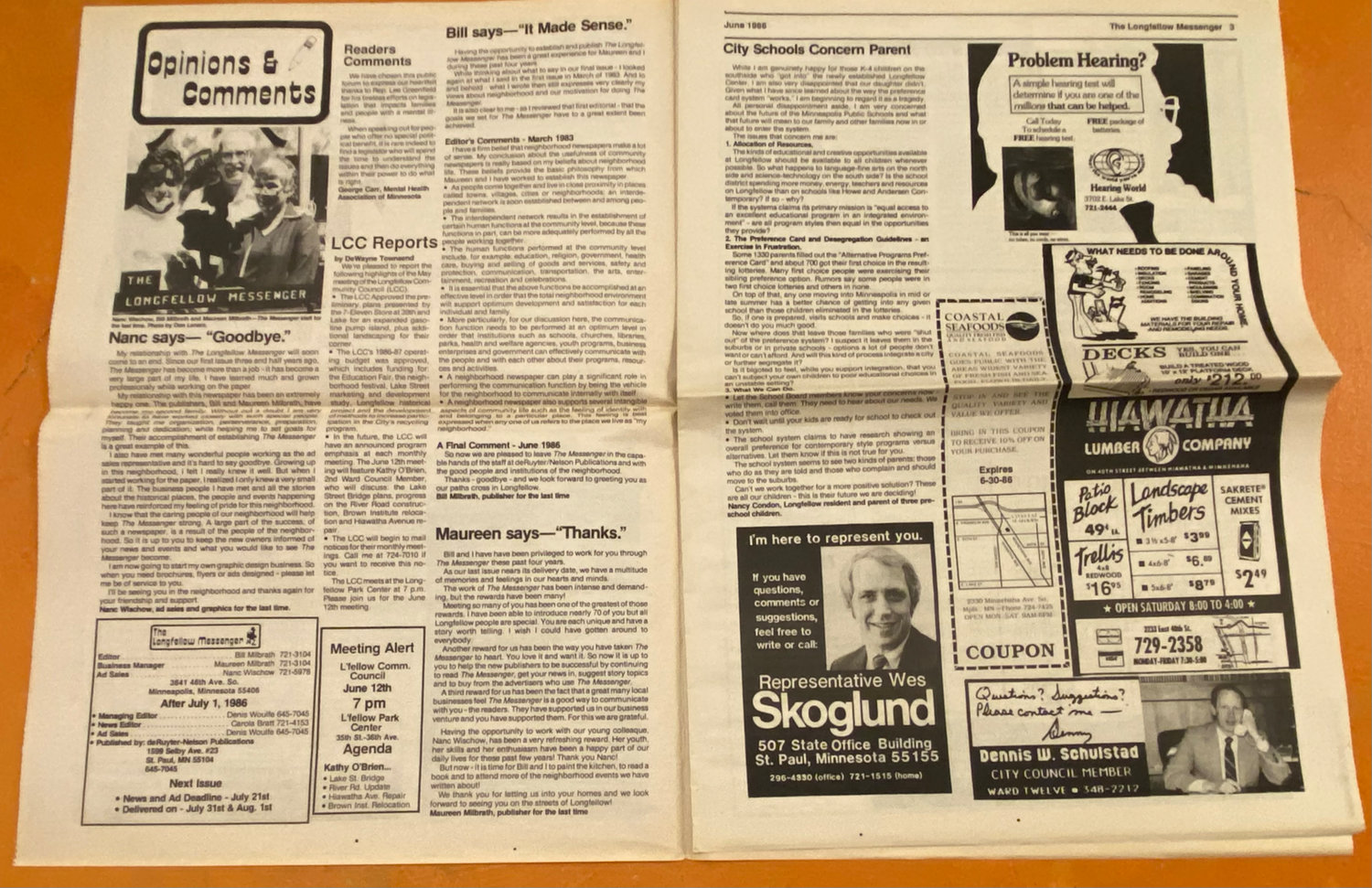 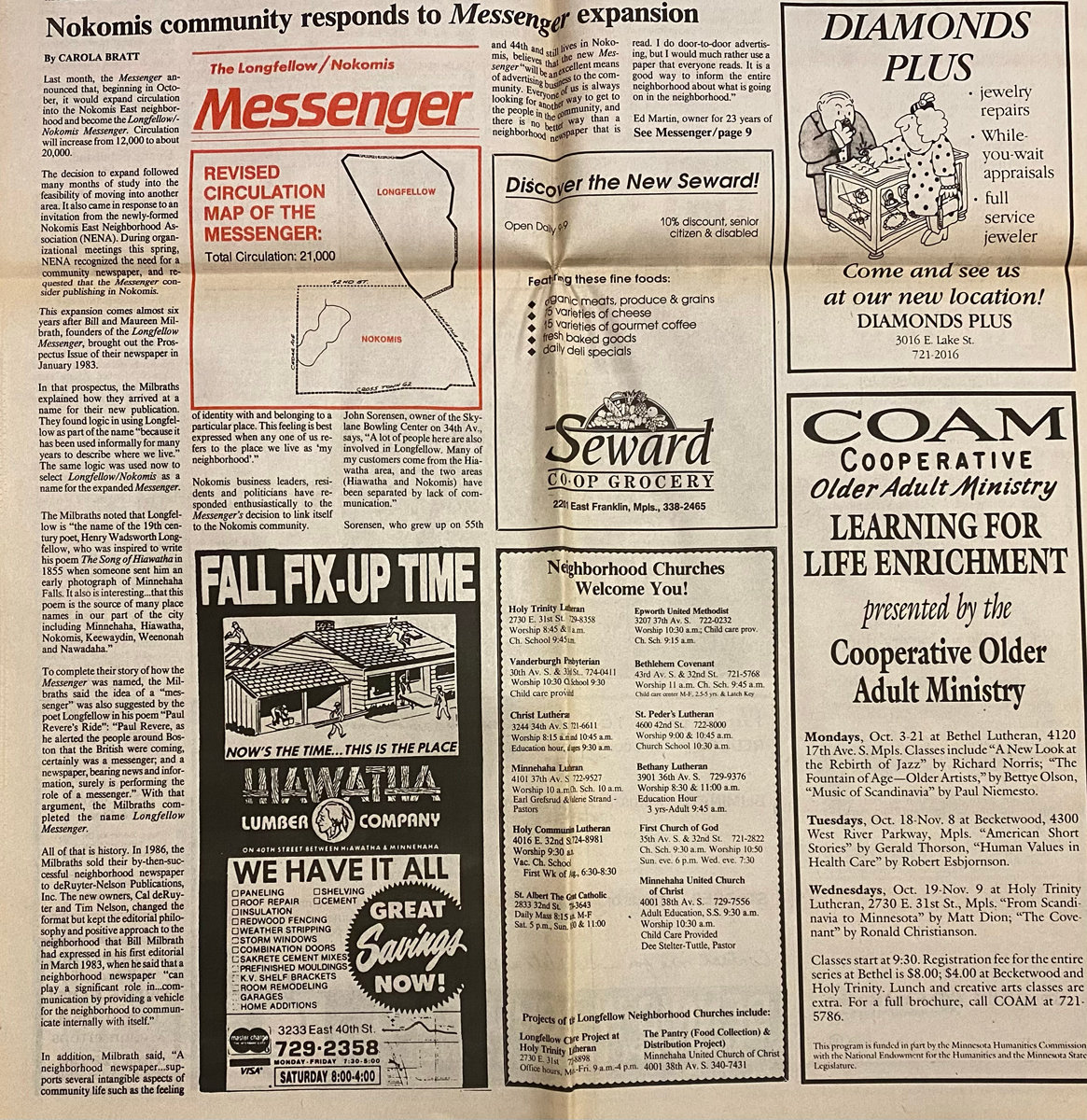 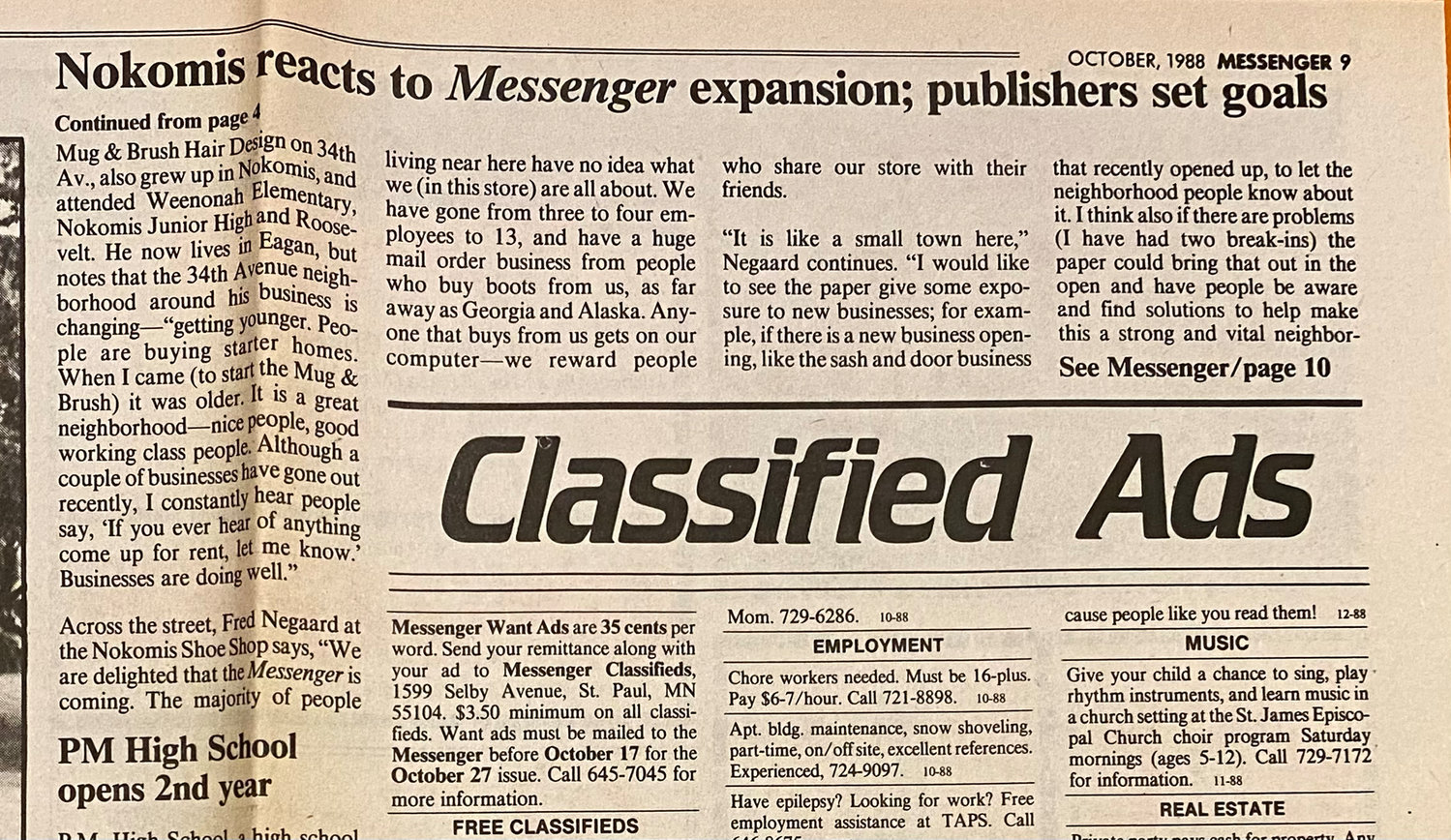 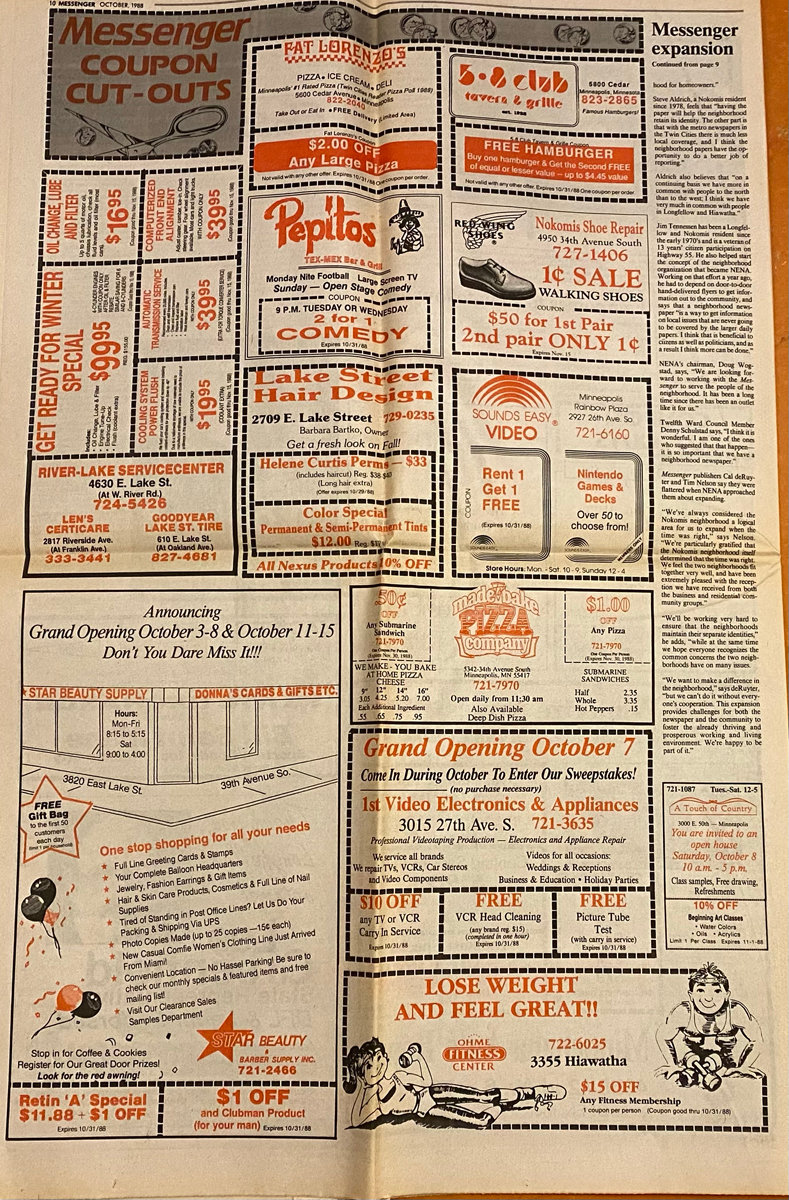 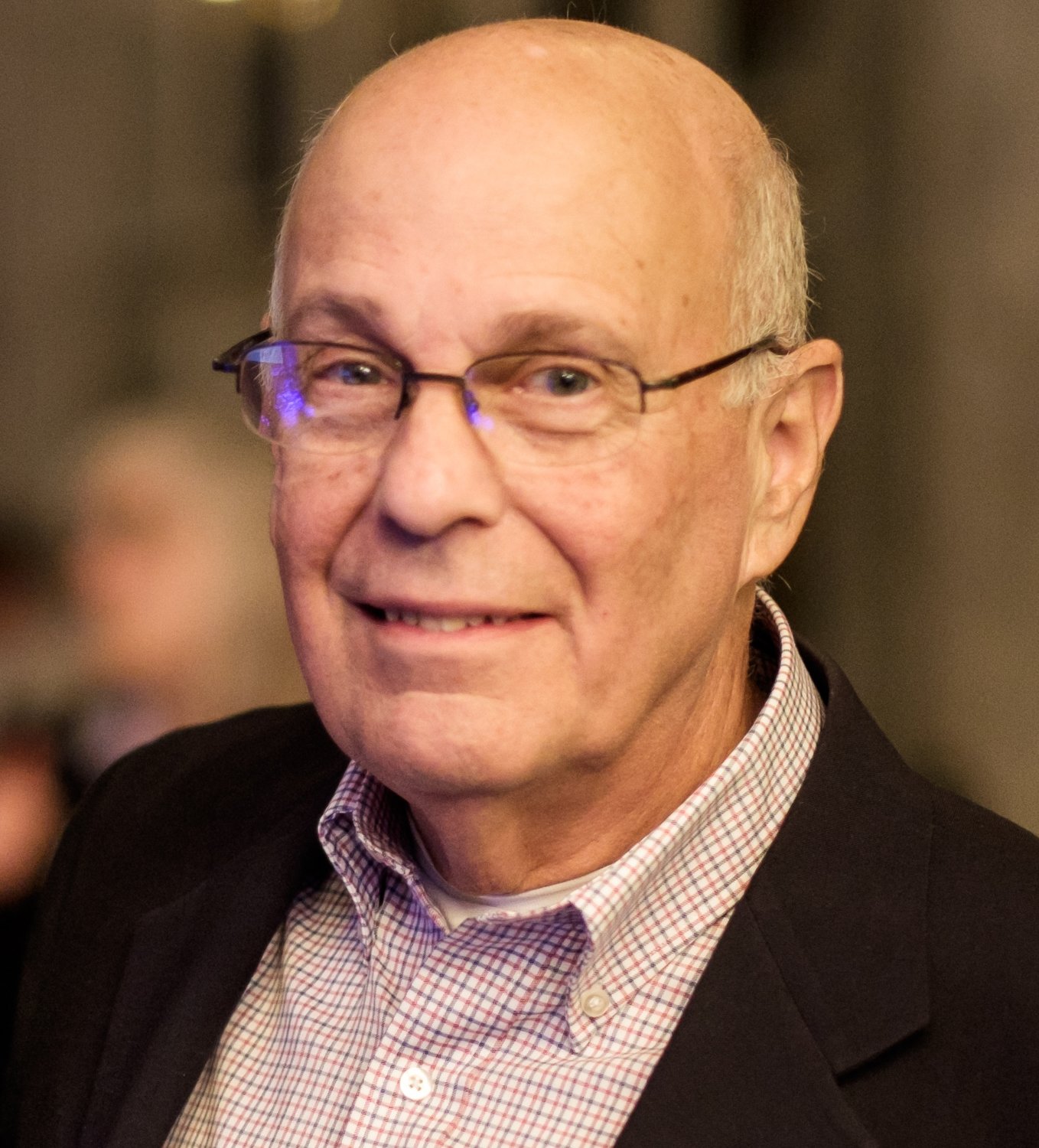 “A newspaper to serve the people, institutions and business enterprises of the Longfellow neighborhood begins its circulation today.”
With that front page announcement, Bill Milbrath and his wife Maureen launched their monthly paper in March 1983. Newly retired from the staff of the University’s Extension Service, Bill, with help from Maureen, had decided to make neighborhood journalism a post retirement career. “Back then, other city neighborhoods already had their own publications, but we didn’t have one in our part of town,“ Bill would later recall. “That was a need Maureen and I thought we could fill, so we plunged ahead without much preparation. It was like jumping into a cold lake with both feet.”
The Milbraths called their paper the Longfellow Messenger. “Our area was named for the 19th century poet who wrote the Song of Hiawatha,” Bill noted. “But Longfellow was also the author of the Ride of Paul Revere. Revere was a messenger. A newspaper baring news and information is also a messenger. So that’s it, Maureen and I decided, we will create a messenger for Longfellow – the Longfellow Messenger.”
Two years after the Milbrath launched their new venture, my wife, Marlene, and I moved into the neighborhood. One day, during that second year in our new home, I was out for a walk when I came across a home-made lawn sign advertising the Messenger. Seeing the sign, the idea popped into my head for a new part-time career. As an occasional freelancer and with a long-standing interest in neighborhood development, I realized that a writing gig with the paper could be a good way to compliment my day job with the Minneapolis Community Development Agency.
When I knocked on the door of the house with the newspaper sign, Carola Bratt came out to meet me. Carola had been recruited by Bill and Maureen to write for the Messenger. But, by then, the Milbraths had sold their paper to two young Hamline University graduates, Tim Nelson and Cal deRutyer, who also published a St. Paul community paper, the Midway Como Monitor.
Carola introduced me to Cal and Tim’s editor, Denis Woulfe. With Denis showing me the ropes, I filed my first story in March 1986. Nearly four decades later, Denis and I are still part of the Messenger team, now led by its new publisher, Tesha M. Christensen.

Emerging stories
During those early years in the 1980s, we Messenger writers covered the emerging stories that were having an impact in our section of town. My beat included a new city initiative to preserve and upgrade Minneapolis neighborhoods. In Longfellow, the foundation for that effort was established in 1983 when local activists came together to form a new area-wide civic improvement association. Several years earlier, city planners had carved up the swath of South Minneapolis between Highway 55 and the Mississippi River into four separate neighborhoods: Longfellow, Cooper, Howe and Hiawatha. Rather than creating separate organizations for each neighborhood, the community leaders who met in 1983 decided that their new civic group, the Longfellow Community Council (LCC), would encompass all four neighborhoods in an area that came to be known as Greater Longfellow.
In 1988, following Longfellow’s lead, the four neighborhoods east of Lake Nokomis formed their own organization, the Nokomis East Neighborhood Association (NENA). That same year, the Messenger expanded its circulation area to include the four Nokomis East neighborhoods, renaming itself the Longfellow Nokomis Messenger.
LCC and NENA, each serving a collection of four neighborhoods, were able to maximize their share of city funding when Minneapolis established its ambitious Neighborhood Revitalization Program (NRP) in 1990. NRP promised to provide $90 million a year over 20 years to the city’s 83 neighborhood organizations to fund grassroots community improvements. While NRP never achieved its funding goals, LCC and NENA were able to receive a combined total of more than $15 million to support their NRP action plans.
NRP would be criticized in later years for favoring White homeowners at the expense of people of color and renters, but the city-funded program did have a positive impact on Longfellow and Nokomis, particular during the program’s most active years between 1990 and 2010. LCC and NENA used most of their NRP dollars to create revolving home improvements loan funds for their residents. The two organizations also funded a variety of special purpose projects including the shoreline and wetlands preservation at Lake Nokomis, renovation of the historic Longfellow House in Minnehaha Park, and gap funding to redevelop blighted commercial sites along Lake Street.
Through the 1990s and into the early 2000s, I also covered the final settlement of the decades-long Highway 55 controversy. For years, community members in south Minneapolis had been resisting effort by highway planners to convert Highway 55 to a four-lane depressed freeway modeled after Interstate 35W. Carola Bratt’s husband, Wally, had been a leader of the community organization battling the highway department. But Wally and his group did more than protest. They came up with a plan for a new form of mass transit that could serve as an alternative to the highway department’s ribbons of concrete. The community plan for a Light Rail Transit line along Highway 55 became a reality when the Blue Line LRT opened in 2004.
As our team’s history buff, along with covering transit and neighborhood development, I got to write about Lost Longfellow – long-gone places like the Wonderland Amusement Park, Robert “Fish” Jones’ zoo at Minnehaha Park and Lake Street’s Minneapolis Moline plant. Those Messenger stories helped introduce a new generation of Longfellow and Nokomis residents to their neighborhood’s history.

Building community
Over the years, the Messenger has done more than chronical life in south Minneapolis, past and present. The paper has helped create a sense of community for a group of neighborhoods that have attracted new young residents committed to an urban life style. For many of them, reading the Messenger each month has become a shared experience that strengthens community bonds.
The need for stronger community bonds is more important than ever now that we have all experienced the pandemic and the trauma following the death of George Floyd in 2020. During the past two years of COVID-19, the Messenger has been one of the few community institutions that has continued to function with reassuring normalcy.
During these past four decades, it has been a real privilege for me to serve as a link between those early days when Bill and Maureen’s fledgling paper was making a name for itself, and today’s Messenger where a new generation of community journalists are carrying forward the Milbraths’ vision for a newspaper that can serve “people, institutions and business enterprises of the Longfellow neighborhood.”
>> More photos @LongfellowNokomisMessenger.com.

Yes, there are some great lawn alternatives

My meeting with the Longfellow ministers