From social worker to auto tech 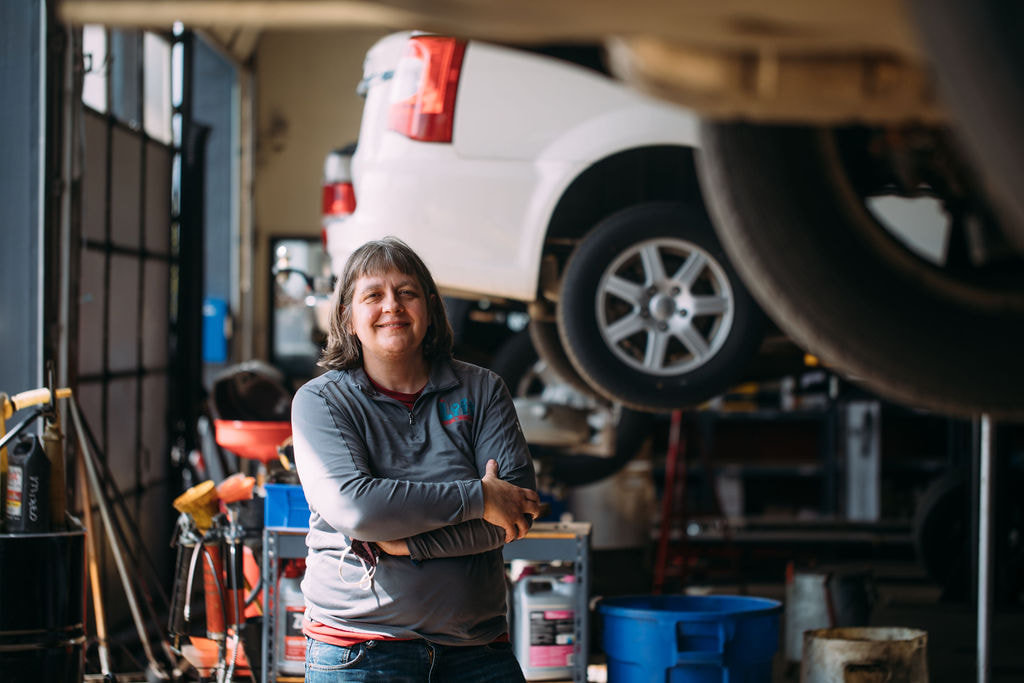 "Going to Dunwoody at age 38 was like doing a polar plunge - super shocking, hard to explain, an extremely hard experience, and also exhilarating and eye opening," said Longfellow resident Cathy Heying, who is executive director at The Lift garage, a low-cost option for those at 150% of federal poverty guidelines. (Photo by Carina Lofgren, Portraits from 6 ft)
Posted Wednesday, February 24, 2021 11:31 pm
By TESHA M. CHRISTENSEN

How does a social worker and pastor end up running an auto garage?
The path between the two isn’t as far apart as one might think, according to Cathy Heying.
“When I was working at St, Stephen’s Catholic Church and Human Services I just kept encountering people for whom a car repair was a linchpin and without a working car their lives either became a spiral downward into deeper poverty or they were trapped from moving out of poverty because they couldn’t reliably get to jobs, health care appointments and so much more,” she observed.
And so, at age 38, Heying enrolled in the Dunwoody auto technician program – a middle-aged lesbian in a room full of 18-year-old boys.

From small town to Minneapolis
Heying grew up in the small Iowa town of Ossian, one of about 800 people. She earned her bachelor of arts in social work from Loras College in Dubuque, Iowa., and followed that up with her master’s in arts in pastoral ministry from St. Mary’s University in Winona, Minn.
She moved to Minneapolis in 1997 and currently owns a house in Longfellow.
“I started as a youth minister, spent a year volunteering in Eastern Kentucky in the Appalachians, worked as an intake specialist at Volunteer Lawyers Network, then worked at St. Stephen’s Catholic Church for nine years as the Director of Social Justice before switching over to St. Stephen’s Human Services where I worked in community engagement,” said Heying.
Then her life trajectory changed.

‘Going to Dunwoody at age 38 was like doing a polar plunge’
Heying earned her auto technician degree from Dunwoody in 2010, and then worked at Sears Auto Center for two years.
Then, she opened, The Lift.
“The Lift is a car repair shop obviously, but we’re also a place that provides a listening ear, warm hospitality and support,” said Heying. “I often joke that we are social workers, financial counselors, and grief counselors and then we fix cars on the side. We have a high value on meeting people where they are at, providing a listening ear and moral support – honor their dignity as a whole person. My entire background has laid that foundation.
“Going to Dunwoody at age 38 was like doing a polar plunge – super shocking, hard to explain, an extremely hard experience, and also exhilarating and eye opening.
“I love Dunwoody and it provided me (who had zero car experience) with a solid foundation from which to build The Lift. But at the end of the day I’m a people person. I’m not that great of an auto tech. I can get by but my brain is just not wired that way so it is hard work for me to think like that.”
She’s glad she got her auto tech degree as she did a lot of the car repairs along with all volunteers in the first years. Plus, it gives her credibility with techs, donors, and customers. But, it isn’t where her best skill set lies so she spends most of her time these days supervising staff, doing administrative work, and raising money.
But when they’re short-staffed, she still gets pulled in.

Can’t keep up with demand
The Lift began by subletting one bay one day a week over on Nicollet Ave. in 2013. They continued to grow until they had four bays and were open five days a week. Heying began officially as paid staff in 2014.
In 2018, The Lift moved to its current location at 2401 E. Lake St., tucked between the Hiawatha Ave. bridge and Arby’s.
They began with no paid staff and served five to 10 people.
Today, they have a staff of 12 and serve 100-120.
The Lift focuses on safety and drivability repairs – things to keep the car safely moving forward. They don’t do major work such as engine overhauls or transmissions.
Still, they cannot keep up with the demand.
“We are really interested in partnering with other local shops to gauge their interest in perhaps taking on one appointment a week and charging the same rates we do for that appointment,” said Heying. “Even with the massive growth we’ve had in seven years, we still are typically booked out three or four months.”
People must have incomes at or below 150% of the federal poverty guideline to qualify for services at The Lift.
The easiest way to make an appointment is by visiting www.theliftgarage.org, but people can also call 612-866-5840. The Lift charges $15 an hour for labor plus parts at cost. “We rely completely on donations and grants to cover our overhead so we can keep our prices that low for our customers,” said Heying.
They’re also looking at expanding operations to add more days and hours, and expanding the mobile van efforts in an effort to meet the great need in the community.

Standing in solidarity
Located a block from the Third Precinct meant The Lift was at the center of last summer’s turmoil.
“We did okay all things considered,” said Heying. They kept a constant vigil at the site, which was pretty successful, until the Arby’s next door went up in flames. Then Heying pulled everyone off site for their safety.
“Our mobile repair van was trashed and most of the tools stolen, our front office was broken into, a lot of broken glass, broken equipment, stolen office equipment. We also lost some customer car keys, but luckily the cars were never taken. Some passersby stopped those who had entered the building before they really got into the shop itself where we had many customer cars and a lot of expensive equipment.”
The experience didn’t stop The Lift from purchasing their building last summer.
“We are here for the long haul,” said Heying.
“One-quarter of our staff live in the neighborhood so we are personally connected to the community. We contribute to the local economy in that we buy parts from the local O’Reilly, Napa, and Autozone. We buy our coffee for our waiting room at Peace Coffee. Many of the staff are eating lunch in the community, doing our grocery shopping after work or running to Target on our break!
“We love this neighborhood and as a business and as staff members we are invested in building community, creating partnerships and growing a vision of our community that is about peace, equity, art, meeting people’s needs, celebrating and standing in solidarity with one another.”

Creativity and community in a time of Isolation

I'm scared – what about you?

From the ‘Hood to the Woods