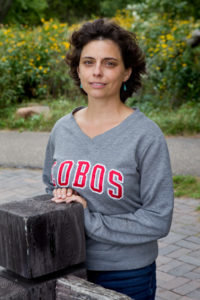 Abigail Cerra, Ward 12 representative on the Police Conduct Oversight Committee, said, “We have got to figure out this criminal justice system. We can no longer look away.” (Photo by Margie O’Loughlin)[/caption]

Abigail Cerra lives in the Ward 12, and has served as a Commissioner on the Minneapolis Police Conduct Oversight Commission (PCOC) since last January. On Sept. 19, it was announced that all PCOC meetings were cancelled until the new year – leaving the city without police oversight.

The Minneapolis PCOC is dedicated to restructuring, re-prioritizing, and reforming public safety. Commission members have a variety of responsibilities including shaping police policy, auditing cases, engaging the community in discussions of police procedure, and facilitating cultural awareness training for the Minneapolis Police Department.

While there is a stated minimum of seven commissioners on the committee, there were currently only four serving. And one of those four just resigned. The city responded by suspending the work of the PCOC until the vacant seats can be filled.

This, while the stakes have never been higher.

Cerra said, “Sometimes it feels like the whole world is watching us. Real change will only happen when the community knows what is really and truly happening with the police and city administration. I see my role on the commission as helping to bring problems within the Minneapolis Police Department to light. We can no longer look away.”

Despite the enormity of the problems facing the city of Minneapolis, Cerra feels hopeful. She said, “The PCOC has been meeting monthly, right about dinner time and the time parents are putting their children to bed. Yet, people were signing on to our meetings and staying until the end. I saw a level of community engagement since the Uprising that wasn’t there before.”

Cerra said, “The police aren’t the whole problem; this systemic nature of this crisis involves the entire court system. It goes well beyond the police to include prosecutors and judges. We have to start by improving our police department though. If you can’t get involved for whatever reason, at least don’t be a roadblock to others trying to move this forward.

“As for me, I am all in for criminal justice reform. I’m going to flex as hard as I can right now, while people are still paying attention.”

Before going to law school, Cerra worked as a social worker at a group home for adolescent girls in Chicago. The girls who lived there were wards of the state, and she saw first-hand how difficult the court system made their lives.

Now a parent herself, Cerra has two daughters under three at home. Her husband is a fire fighter for the city of Minneapolis. She currently works as in-house counsel and pro bono coordinator for Wells Fargo Bank. She has previously served as a Hennepin County public defender, and a staff attorney in the Minneapolis Department of Civil Rights.

Cerra finds value in the PCOC because it gives community members a chance to participate in police oversight. She welcomes comments, questions, and ideas at cerra.pcoc@gmail.com.

She said, "We need community members from varied backgrounds to apply for the vacant commissioner positions. Applicants must live in Minneapolis, and not be employed by the Minneapolis Police Department. To apply, visit: http://www2.minneapolismn.gov/boards/openings/wcmsp-225474.

Once the commission resumes, the public is welcome to attend meetings remotely on the second Tuesday of each month.

LSC: What’s behind and what’s ahead

Should 3rd Precinct stay in Longfellow?