Not the pound you think you know 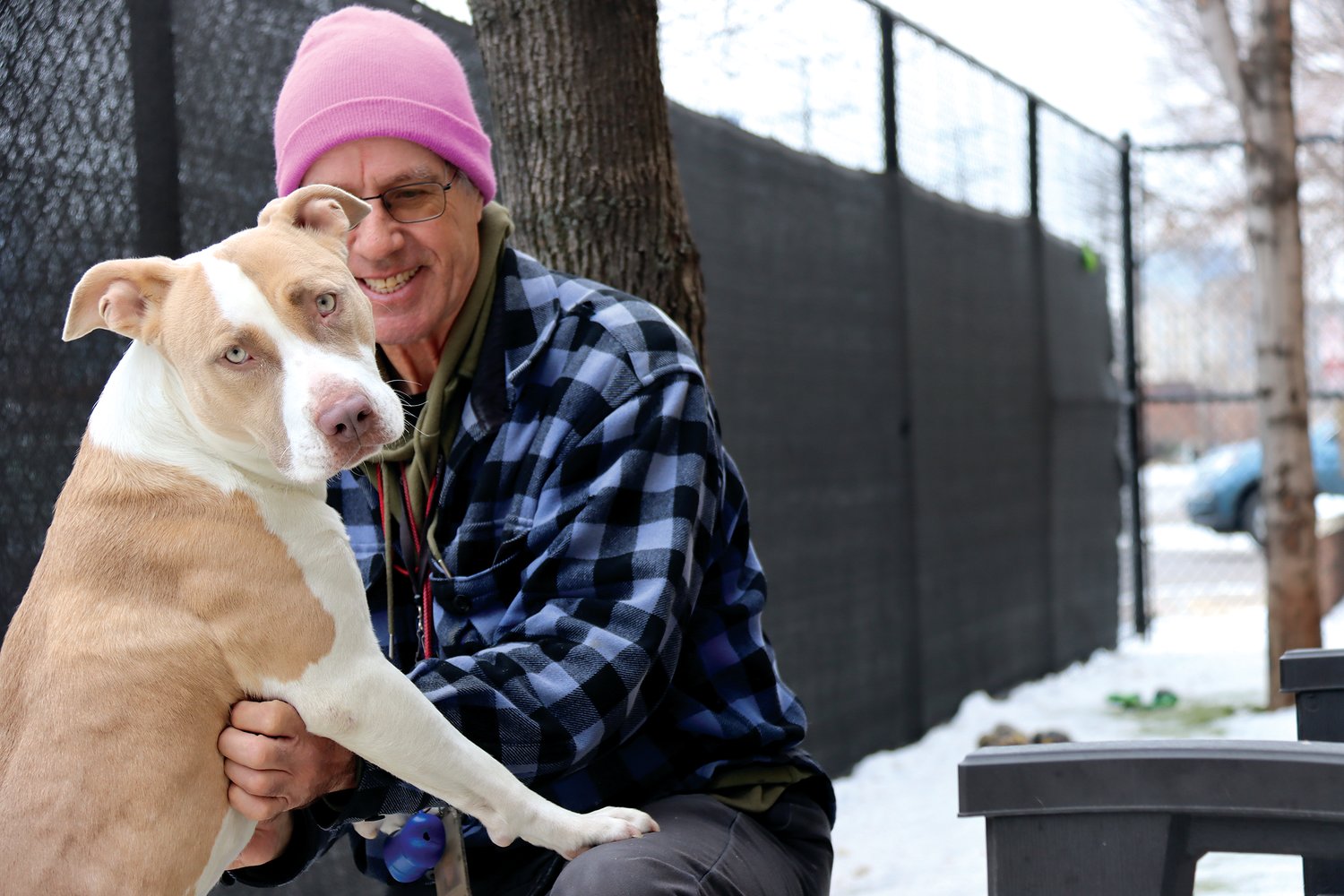 Lyle James takes Honey, a two-year-old bulldog, out into the run next to the Minneapolis Animal Care and Control building at 212 17th Ave. N. James can't have pets at his condo and he volunteers several days a week at the shelter. He is also a carrier for TMC Publications CO. (Photo by Tesha M. Christensen) 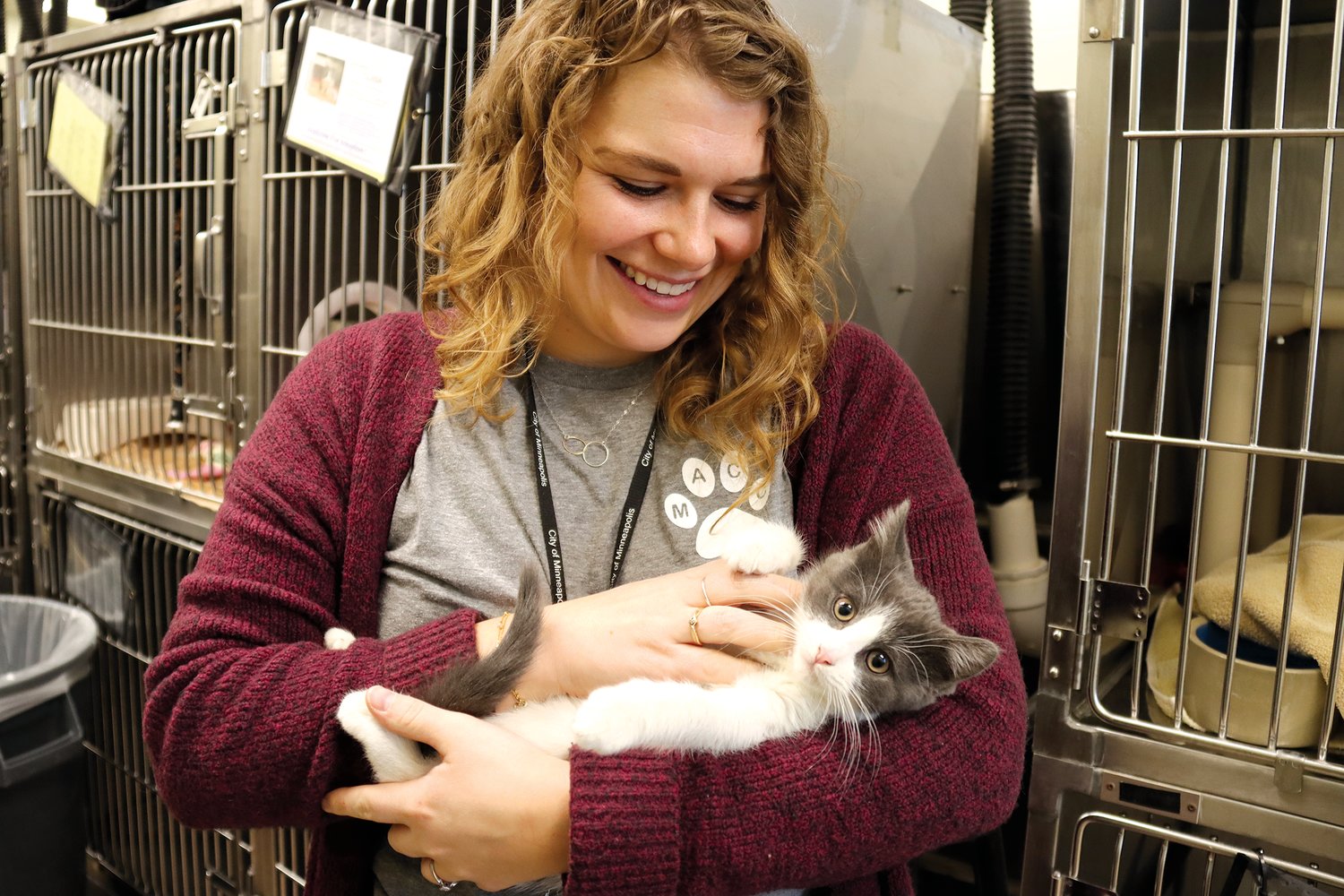 Madison Weissenborn holds three-month-old Llasa prior to a free adoption day event on Dec. 9, 2022 meant to clear out the shelter before Christmas. Weissenborn is the volunteer and community partnership coordinator at Minneapolis Animal Care and Control. (Photo by Tesha M. Christensen) 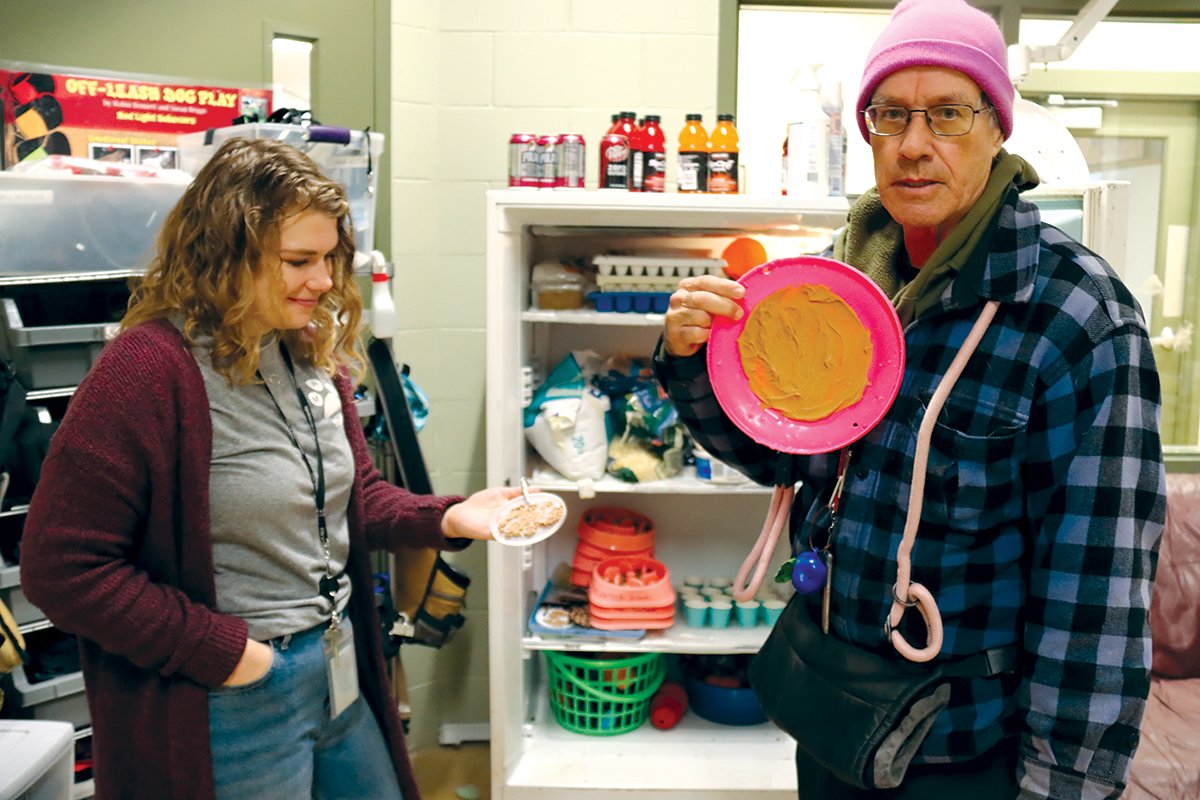 Madison Weissenborn (left) and Lyle James hold up small and large frisbees smeared with peanut butter that are used as treats and enrichment. 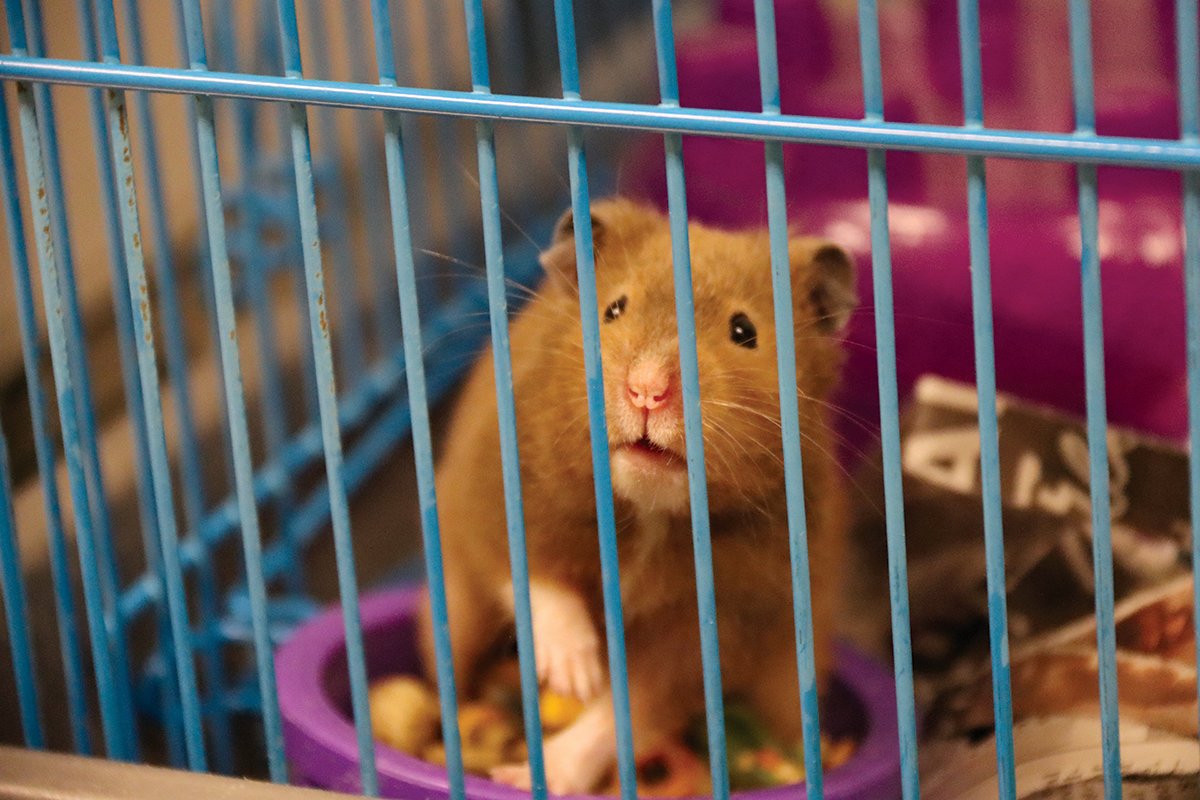 The shelter houses a variety of animals and staff never quite know what will come in – such as birds, chickens, goats and this one-year-old Hamster. 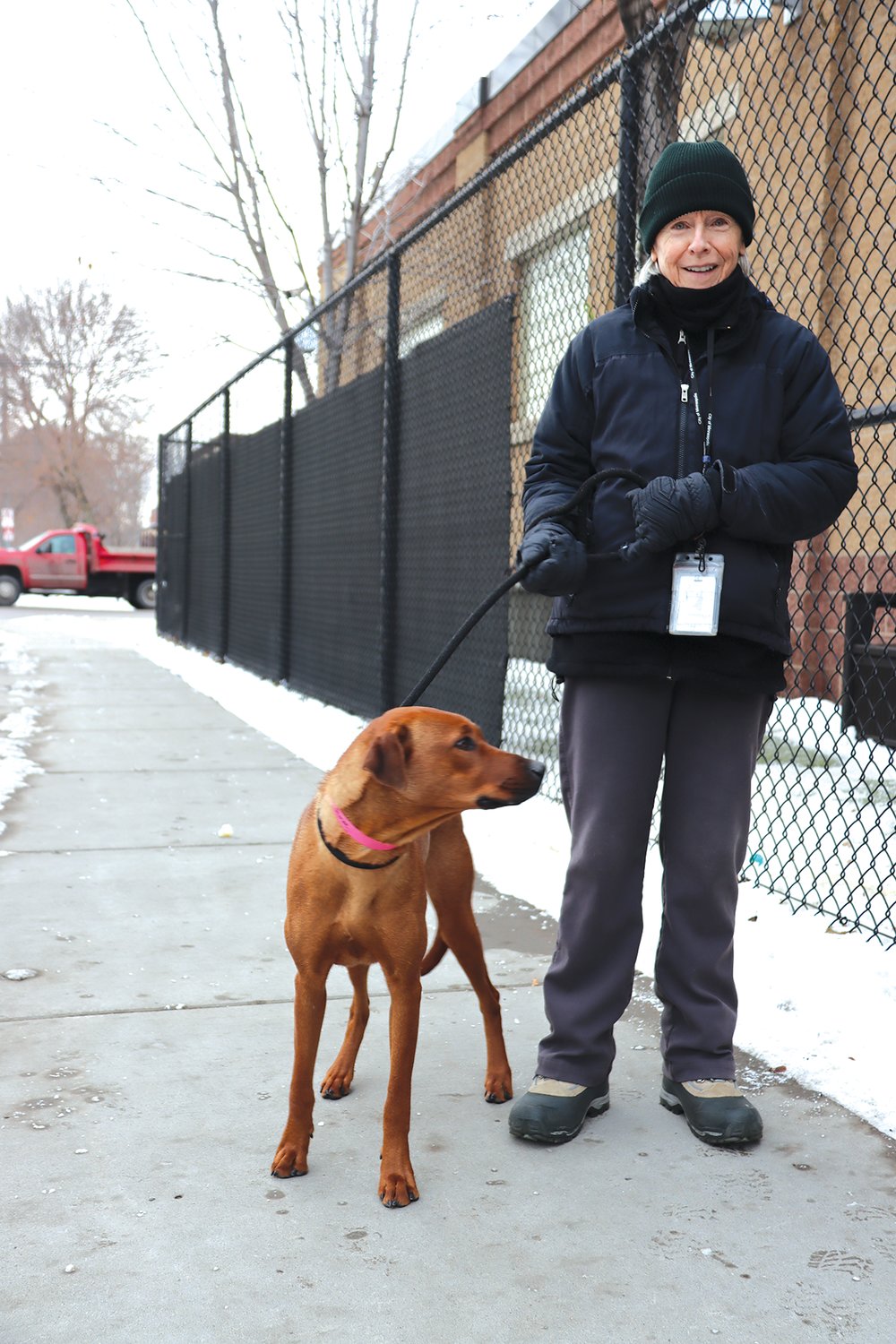 I am a dog walker, cat cuddler, and animal care assistant.”
Lyle James

We take some of the pressure off owning an animal until they get on their feet.”
Madison Weissenborn
Get to know Minneapolis animal care and control

WHAT DOES MACC DO?

• Adopt out companion pets to owners

• Any animal over 7 months old is free of charge

• Dogs and cats under 7 months range in cost from $50 to $100 for Minneapolis residents; fees are higher for those who live outside the city

• Occasional pet adoption days are held where all pets are free

Minneapolis residents can get low-cost vaccines (rabies and distemper) and microchips for $10 each.

The Minneapolis city animal control facility isn’t the grim place many picture.
“For a long time, this place would have been called a pound with all the negative aspects that entails,” observed Lyle James, who volunteers as an animal care assistant. “It’s hard to change the image.” But, he’s hopeful people are changing their minds about Minneapolis Animal Care and Control (MACC).
“We’ve changed a lot in the last 10 or so years,” pointed out Madison Weissenborn, the MACC volunteer and community partnership coordinator. “We’re focusing on the community and keeping people and pets together. Whatever they need, we’re trying to help with that.”
Weissenborn acknowledges that in the past, shelters hid things – or at least, people thought they did. So, MACC works to be transparent and posts all its data on the city’s online dashboard. ”With that transparency, we hope people trust us more,” she said.
Many don’t realize it, but Minneapolis animal control is a No Kill Shelter. That means that 90% of the animals that come in are re-homed versus euthanized. This high percentage is hard for a city-run shelter to achieve, pointed out Weissenborn, because they can’t pick and choose which animals they take. When there is a dangerous, sick or injured animal in the city, it comes to them. “We are an open intake shelter,” she explained.
They get in animals that have never lived in a house before, or never been fed two meals a day. These animals require more care and training to get them to be adoptable. Weissenborn has observed that it takes dogs a few days to feel that the shelter is a safe place for them where they will be fed and cared for. “Cats are more sensitive in general, and it might be longer,” Weissenborn stated.
In addition to regular meals, exercise for the dogs and cuddle times for the cats, there are also enrichment activities. These are designed to use the animal’s natural skills, such as smelling, hunting, foraging, and playing, according to Weissenborn. There are sensory things like bubbles and smells; and cognitive things like puzzle feeders. Plus there are training times. “Behaviorally, it really helps them,” said Weissenborn, who previously worked as a primate zookeeper for eight years and lives in the Mac-Groveland neighborhood of St. Paul. These activities stop an animal from focusing only on when the next meal is or the next walk. “We keep them busy all the time.”

DOGS AND CATS AND MORE
Roughly the same amount of dogs and cats come into animal control, and account for about 80% of the animals cared for. Another 6% are birds. They see a lot of chickens, and some reptiles, pigs, goats and venomous snakes. Not all of these stay long at the shelter, but they go to one of the 50 partner agencies that MACC works with, such as Chicken Run Rescue and the Minnesota Herpetological Society. When Connie came in, they could tell she was part wolf, and a visit from the International Wolf Center and a blood test confirmed it. She was transported to a sanctuary in California that had an opening.
In 2021, MACC saw 4,000 animals come in through their doors. They anticipate that number being higher this year. “Everyone is busier this year,” said Weissenborn. ““I don’t know if its related to the economy or COVID-19.” Their services are up across all categories. “Vet clinics are swamped. We’re getting in kittens because people can’t afford to spay their animals. They fell on hard times.”
While it is true that the biggest bucket of animals that come to Minneapolis Animal Control are strays, not all are. In the past four years, 43% of the animals that come in are strays and 17% are wild. Another 26% are surrendered. For two percent, humane euthanasia is requested.
There are many reasons why pets come in. Sometimes a cat was left behind in an apartment when the owner moved out. Other times, someone left a dog with a friend and never came back for it. If an owner gets arrested, the police call animal control to look after the pet.
MACC provides free kenneling for victims of domestic violence so they can stay in a shelter without the fear that their animals may be left behind in a dangerous environment. They also help owners who are homeless, and those with substance use or mental health disorders who are unable to care for their pets while in treatment.
“We take some of the pressure off owning an animal until they get on their feet,” said Weissenborn.
MACC is in the pilot stage of a foster program with the Animal Safety Net. The program is small right now as they work to expand their foster base. To become a foster, apply online.

DOG WALKER, CAT CUDDLER
James is a Marcy-Holmes resident who lives near the University of Minnesota. He lives in a condo and can’t have pets, so he started volunteering at MACC in October 2012. This year, he has donated 1,424 hours to the shelter. In all, he’s spent 10,600 hours there in the last decade.
“I am a dog walker, cat cuddler, and animal care assistant. Animal Care Assistants help clean cat cages, provide food and water, wash dishes, help with the laundry, remove trash from the receptacles, restock toys in the outside bins, and help with enrichment toys,” he observed.
James is one of the carriers who delivers the Southwest Connector, Longfellow Nokomis Messenger and Midway Como Frogtown Monitor newspapers owned by the small, woman-run TMC Publications CO, as well as the Northeaster that was recently purchased by Vince Brown.
He is among about 150 people who volunteer 700 hours at month at MACC, and they’re always looking for more to take on two-hour shifts. Volunteers must be at least 16 years old.
James is particularly attached to the pit bulls and staffies that come in, in part because they are often mistreated and many consider them to be scary and dangerous. He doesn’t, and believes it comes down to how they are treated and trained.
“I like being with the dogs. I really like the walking aspect of it,” said James.
He didn’t really like cats before he started volunteering at MACC. “For years, I thought [the cats at the shelter] would be dangerous, but they’re not. It turns out preconceived notions don’t work out for anybody. I missed out on a lot of time with the cats because of that.”

BLUE WENT BACK TO HIS OWNER
The most important day James experienced at MACC occurred in November.
He wrote in a Facebook post: “We really have something to be grateful for this Thanksgiving here at the shelter. Blue has been staying with us for quite some time now as his person deals with substance abuse problems. Our volunteer manager Madison was able to have a professional designate Blue as an emotional support animal, which allows him to live with his person in a sober home. Our friends at the North Minneapolis Pet Resource Center raised $1,100 to help Blue’s person pay for a security deposit and rent. Thanks also go out to our fosters that gave Blue a home away from home, and our donors who kept our buddy happy with treats and toys.”